n 1981 she had her first hit with 'Kids in America', a song that would originally be recorded by her brother Ricki, but when a record boss had heard the backing vocals by Kim, and seen the girl, the plans were changed. Not Ricki, but the then 21-year-old Kim Wilde would tread in the footsteps of her father Marty, who was a revered singer in the '60s. Songs like 'Chequered love', 'Cambodia', 'View from a bridge' and 'Love blonde' stormed the charts. Then it became silent for a while for the 'Brigitte Bardot of British rock', but in 1987 she is back again with the American number 1 song 'You Keep Me Hanging On', a cover of the Supremes song. In '88 she is even more successful with the album 'Close', four hit singles and a tour with Michael Jackson. Privately, Kim was also very successful. She bought a house in Hertfordshire, became an aunt (brother Ricki had a child) and found the love of her life in Calvin Hayes from Johnny Hates Jazz (the man who played in her first band seven years ago). Enough reasons to talk with Kim about past, present and future.

Let's take a dive into the past first. How was it to grow up as a child of a famous father, and how were your school days?
Dad was on tour a lot, but Ricki and I went along a lot as well. I did backing vocals. Still it was Ricki who was destined to become the new Wilde star on the pop horizon. But it turned out to be a different story, which you know. My school days weren't very special. Especially since my parents were away so often, my mother Joyce did my father's management, I was on boarding school. Fortunately, that was only a year, I was 7 or 8 then. I didn't like it a lot. I had the feeling of being rejected. I did steal a couple of things, just to get attention. Nothing special, just candy from one of my classmates. It was a form of protest. I wanted to show my discontent that way.

Can you remember your first love?
Yes, it was a boy who was also on boarding school. His name is always at the tip of my tongue, but I can't seem to remember it now. I know I was crazy about him, but he didn't see me at all. He was in love with someone else, Nathalie was her name, a beautiful child. I hated her of course, and felt rejected once again. That boy was what you'd call a hunk, but he wasn't very bright. It's strange, but ever since then I prefer the intelligent type. Boys with brains, the exterior isn't as important.

After high school you went to art college.
Yes, and I still like art a lot. The only think I want to do, apart from music, is to visit galleries and exhibitions. My favourite painters are Chagall and Toulouse-Lautrec. I paint a lot myself, it's a great way to spend my time.

You became a singer at a very young age. Did you ever have other jobs?
Yes. My first job was when I was still at school. I started budding flowers in a greenhouse with my best friends. Every saturday, you know. I also cleaned the house of my piano teacher. I worked in a department store for a while, selling dresses, and of course cleaning in a hospital. That was nice because there were so many friendly people there. A friend of mine was locked in a broom closet for some time there. That was a practical joke of our colleagues...

When you became famous they said you were sexy. The girl with the beautiful pout. The Brigitte Bardot of British rock you were called.
Yes, but I didn't like it at all, being called that. It wasn't like I was flaunting my sexuality. If anything I felt insecure about my looks.

What would you like to change about yourself?
I think I don't read enough, I don't work out enough and I would want to be less critical of other people. I'm very demanding, especially in relationships. It's always been that way. But when I am in love I do give myself 100%.

What is your ideal man?
He's got to be perfect! As a teenager I like blonde boys with long hair and an athletic frame, a bit like Tarzan. These days I judge their character more. Honesty, fidelity, intelligence, humour. Perfect, maybe too perfect.

Someone like Calvin from Johnny Hates Jazz?
Yes, it's no use denying it now.

Are you considering marriage?
Not right away, but I don't hate the institution of marriage. My brother Ricki is happily married and my father and mother have an ideal marriage. When I look at them I think it's great that they have a perfect relationship.

Once you said in an interview: the only thing I wear in bed...
...Is my Chanel no. 5... hahaha. Right! Marily Monroe always used to say that, and if it's good enough for her, it's certainly good enough for me.

Do you like Hertfordshire?
Yes, it is a great house and it is being renovated now. But I do feel at home on the countryside, yes.

What are your plans for the future?
To keep making records, to write good songs, maybe play in a movie, as long as I don't have to play a blonde bimbo, and to write a book someday. It will be a busy year, 1989! 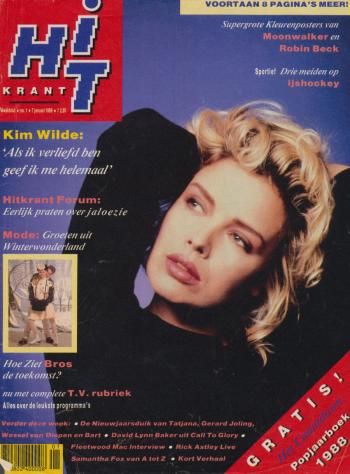 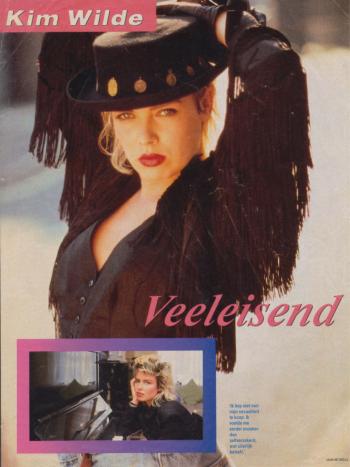