Kim Wilde doesn't speak about her boyfriend Calvin: 'But I just might surprise you with a wedding...'

1988 was an exciting year for Kim Wilde. She had a whole lot of hits, went on tour with Michael Jackson and stunned everyone by starting a relationship with Johnny Hates Jazz-member Calvin Hays. When she was briefly in Brussels, we wanted to talk about this with her. But Kim wasn't too eager to talk about her lovelife.

Kim Wilde is tired. She is at the end of her strengths. That's why she plans to go on holiday for a while. But after that she works very hard again. Because this year Kim has big plans as well.
'At the end of every year I say to myself that I have to take things more slowly, but after a few weeks of rest I want to do something again. When you want to survive in this business, you've got to work, work and work harder. And I have to be honest that it's still fun for me. Otherwise I would quit immediately.'

When you release a new LP and there's a lot of work to be done, how do you relax?
Usually there is no time for relaxation under those circumstances. You're glad to go to sleep at a reasonable hour. And once you're home, or in your hotel room, you sleep very deeply. People thing that the life of a popstar is exciting, that you travel to far off countries and that you party all night. Well, forget it. When we are on tour, I just see the concert halls, maybe one or two restaurants and the hotel. There's almost no sightseeing involved.

What do you like to do better, record albums or touring?
Both in fact. The record is the preparation for the tour. And that's why I like making records, because that means that I can go on tour again. As I said, it's not always big fun, but I couldn't live without it either. It's always a big experience to be in front of a mass of people who came especially for you. That's an incredible high!

Your tour with Michael jackson was a big success. But that was probably the biggest audience you've had to perform in front of? Did you have any problems with that?
No, I felt really at ease. It was a challenge and I took it on with both hands. This year I'd like to do a world tour. I've never really done that before. I think I've acquired a taste for it.

According to our English colleagues you have no reason to complain. You deliver great work and you have finally found the love of your life, Calvin Hayes.
I don't want to talk about that too much.

But you're in love, aren't you?
(Again no reaction, quite the contrary: Kim starts to look a little angry and starts laughing nervously)
The English press has to write about something to fill their pages, so they just make up something. Apparently Calvin and I are an item. Let's just say that if it were true, I wouldn't be flaunting it. Of course I might surprise you with a wedding! (smiles)

Why is it that Kim Wilde has always been synonymous to the "ugly duckling" without boyfriends?
I never thought I was especially beautiful and they've always pushed this point. I am also not the type to go from boyfriend to boyfriend. When I start a relationship with someone, it's serious.

Are you harrassed on the streets by male admirers?
Almost never. I live in an ordinary London neighbourhood and the people who recognise me have gotten used to me. Just when I went swimming in a public place people said things like "I'd like to see you naked". I got tired of that. Nowadays I go swimming with friends at their home. But I can do my own groceries or drink something in the pub. But when I dress beautifully or wear an exciting dress, I am guaranteed to be noticed and that's when it starts. 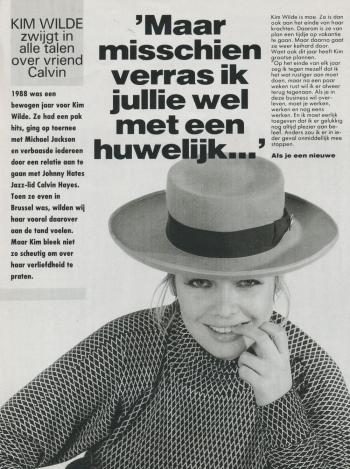