Whoopee, it's Comic Relief Week, so find a red nose and dig deep for your dosh! Who, we wondered, could we possibly get to look really stupid ad act the goat for our cover to celebrate this wondrous event? Why, none other than Miss Kimmy Wilde, Miss Carol Decker, Miss Sophie Lawrence (Diane from EastEnders) and that rogue of a comedian, star of Friday Night Live and scriptwriter extraordinaire, Mr. Ben Elton! But it didn't quite go according to plan! Kate Davies tried to make some sense of it all. Pictures: Tim Roney.

"Oh yes, me and Ronnie buy tons of condoms!". Oh dear, it's going to be one of those conversations. It's Carol Decker talking (who else?) casually in between blobbing rouge on her cheeks and scoffing mouthfuls of crisps. "Yeah, when we go to pay for them, Ronnie always says at the till, 'yeah that'll do us for tonight, doll...'. " Lawsky - we're only minutes into the photoshoot for our Comic Relief cover and Carol's already made Norman the ferret blush the colour of a comic relief nose.

It turns out they're for the band, who like to play extremely silly games with them like blowing them up and sticking them on their noses. "I tried that once", says Carol now wrestling with a lipstick, "but I got covered in snot."

Lawsky, that's put me right off my vol-au-vent. Also fighting for a space at the mirror are Kim Wilde (she's now attacking her hair with spray) and Sophie Lawrence from EastEnders, who's doing interesting things with a powder puff. It's all a bit of a mad panic actually to get the girlies looking even more luscious.

We'd hired a make up artist to come in and glitz up the gang a bit, but an hour had passed and she was still as non-existent as Lola's tact. We were just about tiring of cracking corny jokes ("What are Humpty Dumpty's parents called? Sam and Ella - salmonella, geddit?" Er, thanks Carol, stick to the singing), when Kim announced "Oh come on, let's go and buy some make up."

And no sooner than you could say 'Normal the feisty ferret fancies frisky Fiona the four foot Flamenco foot tapper from Flimwell' than they all dashed out the door, Gold American Express cards in their hands.

Bemused shoppers in nearby Covent Garden fled as the gals dived into a nearby chemists and descended on the make-up counters like the cast of Neighbours on a free bottle of blonde hair dye. I chased after them (trusty Number One reporters are always where the action is) but with not quite so much vigour, 'cos a chilli I'd eaten the night before was having a violent argument with my stomach.

I mentioned this to Carol as she smears foundation all over her face to find she says, unsympathetically, "Oh God, I do hope you're not going to fart while we're in the studio." Huh. I explained nicely that no, I wouldn't, but I would try not to throw up over the photographer. Meanwhile, as Carol looks for something to cover up the angry zits she's acquired overnight courtesy of a dodgy Chinese meal, Sophie's hunting for powder puffs and Kimmy's trying to find a lipstick to match her red nose (er, her plastic one that is, not her real one). After virtually clearing out the shop and leaving a dazed but happy shop assistant to recount tales of the day she sold £130 worth ludicrously expensive make-up to two popstars and a girl from EastEnders we head back to the studio, where Ben is totally bemused by the whole episode.

"Oh now honestly, you've worked yourselves into a right state", he says to Kim as she tells him about the episode. He recoils in horror at even the smell of the make-up ("I hate the feel of it and anyway, I'm not that sort of man"), but is more amazed by the names of some of the gunge Kim, Carol and Sophie have just splashed out on.

"Hothouse Melon?", he says in astonishment as Kim shows him a blusher. "My God, that sounds like the title of a dirty film - Kim Wilde in Hothouse Melon Shocker!" That gets her and the other glamourpusses giggling as they change into their Comic Relief gear for the photographs.

They're just about finishing the shoot when a hot and flustered make-up girl stumbles in, apologising frantically for her lateness. Still, she does get to powder Ben's nose!

Soon it's all over and the four stars go off their separate ways. "Thanks a lot", says Ben as he leaves. "After all, I was only doing this because Stephen Fry's too ugly to be in the pictures..."

"Well, I'm actually here because although Stephen has done a very lovely interview with you he's very shy and reticent and also sensationally unattractive. I'm always happy to do anything with Comic Relief especially when it means sharing a photo with Kim Wilde."

Why do you think Comic Relief has been so successful?
Because an awful lot of people have mucked in, but also because our Geldof character behind the scenes - and I know that's a terrible term to use - Richard Curtis, who is a brilliant writer (he co-writes Blackadder with Ben) works his guts out six months a year for it and refuses ever to take any credit. It's got a very high profile and people can have a lot of fun and identify with it very quickly.
I'm very proud of Comic Relief because it takes a very serious look at the campaigning side and goes for people's hearts and minds. The West has almost encouraged the Third World to develop too quickly, to take finance and build with money they have to pay back and it's been a huge rip off so people who are interested in Comic Relief should know why there is this problem. Comic Relief thinks about what it does as well as doing it.

Why do you think Comic Relief gets so many stars involved?
Well, I don't normally get on the front cover of Number One and frankly I'm very nervous about it! (Ben's an avid Number One reader - hurray!) I don't think anyone's claiming to be doing anything heroic - it's a small thing to do and people do whatever they can. But it's also fantastic fun and it was conceived that way. There's no reason people shouldn't celebrate the future and the way we can help other people's futures.

Do you think Comic Relief can be accused of letting people jump on the charity bandwagon?
I am concerned about the incredible desire people have to be cynical, especially pop stars, who are professionally cynical. As long as you are committed and involved in what you are doing there's no reason not to manke it a big nationwide thing.
Comic Relief isn't just about raising money, it's about raising awareness. There will always be somebody wanting to have a go, but let's be honest, people who get involved in Comic Relief don't actually need any publicity.
And of course, it's a real accolade, to get on the front of Number One. I mean, actually, I don't believe this is really happening. Stephen Fry rang me up, you see, and said, 'I've done this interview and they want me to be on the Number One cover, but I'm far too ugly, would you like to do it?' But I know this is really all a set-up and I'm just waiting for Noel Edmonds and the Hit Squad to appear.

What will you be doing for Comic Relief?
On the actual night, I shall be a nosereader. No that doesn't mean I shall be reading notes off my nose, but I believe that me and possibly Sue Lawley, the reigning queen of current affairs broadcasting, will be sharing the same desk. We shall have nose of the myriad insanity that sweeps the nation on Red Nose Day - there will be nose of publications in tuts - there will nose of publicans in tutus, there will be nose of scout troops sitting in vats of porridge and I'm fairly certain we shall be able to make a fairly amusing nose item out of the events that are going on. (groan!)
In the day time it'll be quite a treat for me as I'll be going to my old school - the first time I've ever been back! They've raised money and I'm going to collect the cheque. It'll be great fun to look at the old place (in Goldalming, Surrey). I expect they'll want to know things like is Rowan really as ugly as he looks and are Rik's spots real?" 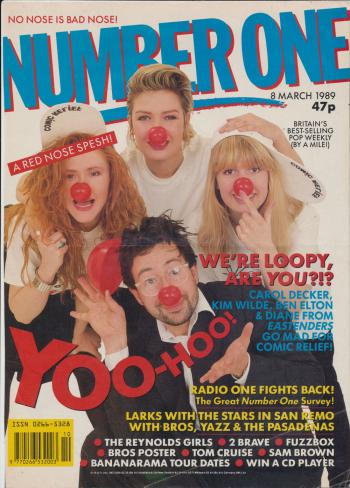 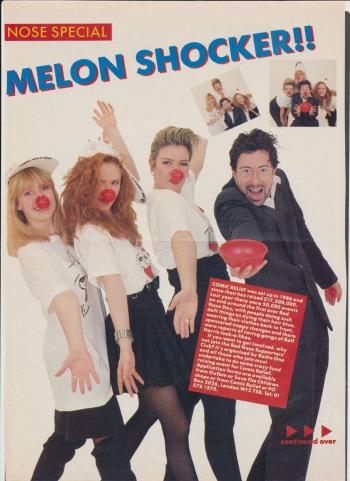 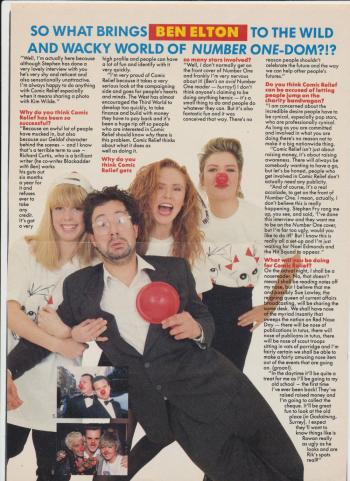