Kim Wilde: the hangover after the party

Kim Wilde can look back on a successful pop year. Her recent album 'Close' was awarded several times. The studio work delivered a handful of top ten hits. Especially in England, where Kim was finally taken seriously after eight years of hard work. Not in the least thanks to the European tour with Michael Jackson. In contrast with the successes is the mental crisis the 28 year old singer has found herself in. Something like 'Doctor, I feel so lifeless and I eat too much'. The hangover after the party.

A few pounds more than her ideal weight, Kim meets your reporter in a mood that says 'Let's just make the best of it'. Two years ago she let the press wait for over 20 minutes because make-up had to be perfect and the sensual body had to arouse some excitement. Now the undyed hair is loosely around the head, screaming for a comb. The paleness of the skin isn't camouflaged by pancake. That will come later when the camera arrives. Maybe a rundown of the impressive array of successes over the past year will bring the mood up a bit. Kim: "It has indeed been a golden year for me. Which flushes out all the frustrations from before all at once. Everything happened at exactly the right time. The LP 'Close' is easily the best, most balanced album I ever made. The LP was a question of 'sink or swim'. If this one had flopped I would have gone down in history as the blonde girl who sang 'Kids in America' so nicely. There was some high tension in the Wilde residence beforehand, because the LP was another 'family affair'. Dad, Ricky and I have been very critical choosing songs. We have written off three times as much songs of our own than we used to. In the old days I used to think 'it's a nice enough song and my brother wrote it, so oh well...'. That didn't work, because the success of my old records was too unbalanced. In hindsight we can be very happy about the selection of songs that made it onto 'Close'. Although it is still a question of waiting. After some deliberation we also went and got in a producer. Ricky, who always produced, had to bite the apple. I didn't want to leave anything to coincidence. A man from the outside brings in a fresh view. It's easier to fall out with him and vice versa. It worked. Tony Swain wanted more from my singing than ever before. He let me sing higher notes than I'd ever sung. It was an enormous kick for me. Next to singing techniques he demanded everything from my emotions as well. The melancholy on 'Four letter word' is the result of that. I matured as a singer with that song. I'm proud that my father wrote the lyrics of that song. He deserves an award for it. The only disappointment I had to take was not being nominated for any Brit Award. Despite the fact that I was the best selling female singer of the year. You can't win them all. The offer to perform as Michael Jackson's special guest was a gift from heaven of course. You get to perform in front of a million people. A fraction of that can guarantee a good record sale. And that's exactly what happened. During the first performances I nearly died. I'd never performed before such masses. During the first few songs my voice wasn't so steady. But I created a lot of goodwill in Europe. I had enough hits to be recognised. After two or three songs the ice breaks. Then the masses are moving and as an artist you walk on air."

"Everybody wants to know what kind of person Michael is. If he's really as 'wacko' as everyone suspects. I can't answer such questions. I have rarely even seen Michael. One time I posed with him. I was stood next to him and after two minutes I was pulled away again. There hasn't been any contact. Before the concert he was led to the dressing room by his bodyguards. Everyone was kept at a distance. They were images I knew from a movies about Elvis Presley's tours. The only thing the artist has to do is perform. Everything else is done for him. Michael was, voluntarily or not, fully isolated from everyone and everything. Maybe that's why they're so good in their shows. They can prove themselves that way. And live it out. I have seen almost all of Michael's performances, or at least part of them. They were all good. He had total control about what happens on stage. Not even the slightest detail slipped from his attention. Like all big artists he's totally in his element before such a crowd. While the tension has to be twice as big as it was for me. He didn't appear to suffer from it. I don't know whether I learned from it, but the experience with Michael made me think. I don't know how Michael feels, but the price of total isolation and alienation of your fellow human beings is too high for me for a place in the Guinness Book of Records. After all the successes in Europe it's no surprise that I'm thinking about America. Not fanatically, but still... I already had a number one hit there with an old Supremes song, 'You keep me hangin' on'. A nice success, but a bit of a fluke. Just a song that resounds and sells. I went to America a couple of times then. Not really for fanatic promotion work. I did have a photo session. It was a horrible flop. When I looked at the pictures, I had this 'deja vu' experience. I looked like Belinda Carlisle's twin sister. She was 'hot' in America at the time. They even gave me identical clothing. You don't score in America if you don't live and work there. Sheena Easton did it, yes. I don't feel like that. I want to be with my family and friends. I want to cuddle my two year old brother and six year old sister from time to time. And walk on the streets without being bothered. Then it's better to not have success in America..."

I have been working really hard for a year. But over the last three months I haven't been able to do anything at all. It's still hard. I'm above my ideal weight by some pounds and I am not getting more beautiful, but I don't care at all. The whole showbusiness is unimportant to me now. You're right, I'm blowing up my own image. I just don't feel like being sexy for a while. I can't be dragged into a fitness studio. I am far too lazy for it. I go swimming for an hour sometimes, but not too fanatically. I am more concerned with my recent mental decay. I should be over the moon after all the successes. My life should be a party. It's not. You can't buy happiness. It's a cliché, but there you go. Recently a friend called and asked how I felt. 'Totally fucked up', I answered truthfully. 'Look at all your gold discs', she said. 'It doesn't help', I said. I called some more friends, one is out of work, the other divorced, and together we cried that night. And we drank more than was good for us. We talked about relationships and children. I love children, but I'm not ready for them right now. I have a relationship with Calvin Hayes (from Johnny hates Jazz - ed.), but I don't feel like marriage. I just don't know what I want. I must be realistic, writing songs for my next LP. Work will probably remedy my blues. It's the hangover after the party. I have been in the clouds for a year. The success didn't end. Now I'm back in reality. All that pleasure cannot stay unpunished. " 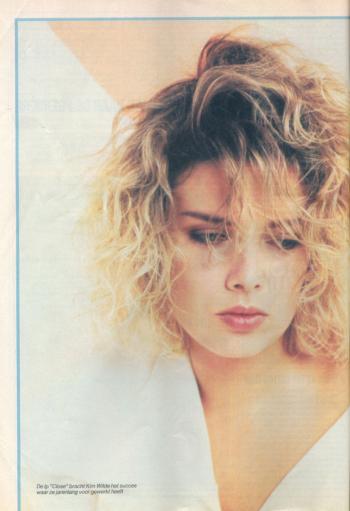 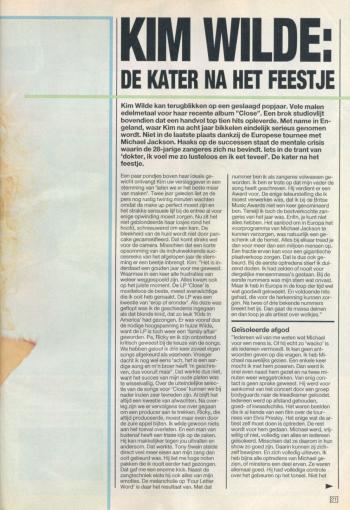 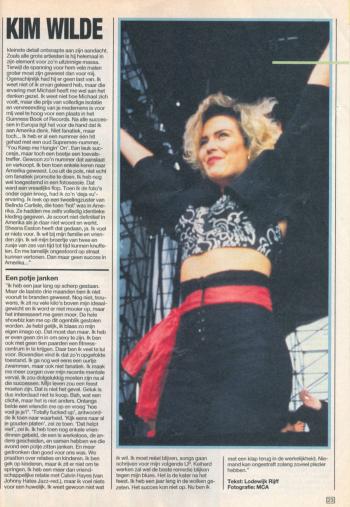