Kim Wilde: Three clicks and then she goes away ...

No pictures, no article!', Such is the merciless rule that directs the implementation of a magazine in general, and your favourite magazine Salut! in particular. And while many of us receive full page in the best titles, some artists, however, fear of overexposure. Kim Wilde, fortunately, does not pose such a problem and as soon as her European tour with Michael Jackson was over, we met again for an unusual camera date: on the other site of the lense.

This time we decided to show you what happens during a photo opportunity, the hidden face of this demanding and precise work is to seize, to the delight of fans, those images that fill your magazines. For some shots, it takes hours of work, each image requires a change of costume, scenery or props, in order, disorder, or both ... The world stars who have little time to give their precious moments with the press of each country in which they are famous, not least as the most important titles, merely do a long session with photographer of their choice. These images only serve thereafter to everyone, we will see them everywhere during many months. Boring... Some, without being solicited as the biggest stars are the same. Even more annoying... And then the other, the vast majority, to be fair, comply with kindness in what looks like mostly a torture session... 'Sit, stand, head right, a little less!... A little smile... Again, with another jacket? We will try to move a little, eh ... wait, I change my film...'. And like that for hours. Besides everything you put on the skin to shine and to hide the bags under the eyes of the previous evening, or whitish complexion of three months of studio recordings ...

Well, anyway this is not hell, and then the others also suffer in silence. Found in a corner of reporter messenger that awaits his turn or the slightest pause for withdrawing one or two replies from the artist, the press officer who politely chatting to wait for the photographer's assistant and an ear on the radio who spends his favorite music, and the other, sometimes lagging behind, which threatens the slightest wishes of the photographer to change a light or decoration. As the master of the game's first photographer. In this case, Bernard Leloup, who has trapped inside his black box all those who rock the planet for over twenty-five years ... Impressive, no?

For the seventy-two billionth time (perhaps less ...), he met that day one of our favorite singers, those with whom we like to work with because everything is always great. She is beautiful, she is on time, she is smiling and is a very professional person. In no way does Kim snub Salut! because she accompanied Michael Jackson, because her album 'Close' is a hit, and that all her singles, here as elsewhere in Europe are selling like hotcakes. No, with his usual charm and sweetness, it performs very seriously in France to promote her latest 45, 'Never trust a stranger'. She looks bright because she comes from Barbados, West Indies, where she spent New Year's Eve. After celebrating a family Christmas with her little brother (Marty Jr., age 7) and sister (Roxanne, 9 years), particularly spoiled as every year, Kim went to the sun to finish her year of success.

'One of her best years,' she told us, of course essentially marked by an extraordinary series of concerts in the biggest stadiums in Europe, before a hundred forty thousand spectators over two days at Parc des Princes, Paris. It was in June and 'You Came' was in theTop 50. Everywhere she toured, Kim continued to meet with journalists and photographers to promote her music. An exhausting schedule! She still has a few more months before having exhausted all the resources of his album and finally finding the time to really look after herself.

Kim is currently developing a farm in the English countryside and was very proud to tell us about the restoration project, which respects the character of the area where the building is located, has been appointed to be rewarded... Here she will write most of her eighth (!) album. A relaxed and studious photo session comes to an end. We leave this gigantic studio workshop called for each start in his direction, a little tired, certainly, by the concentration required for a job well done, but happy to have spent a few hours in such charming company. Thank you, Kim. 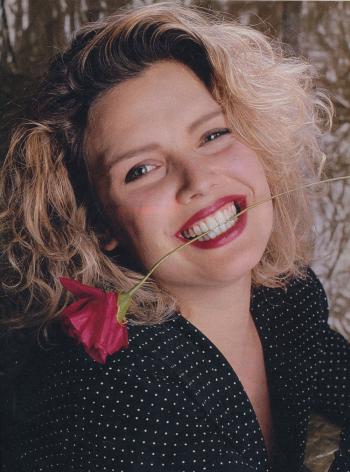 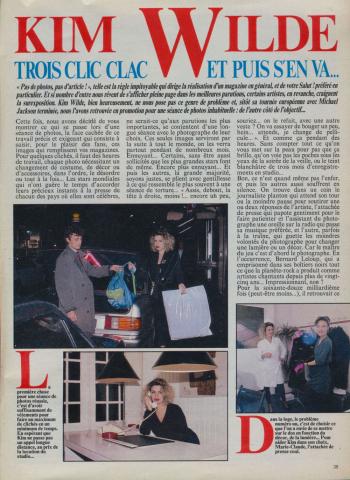 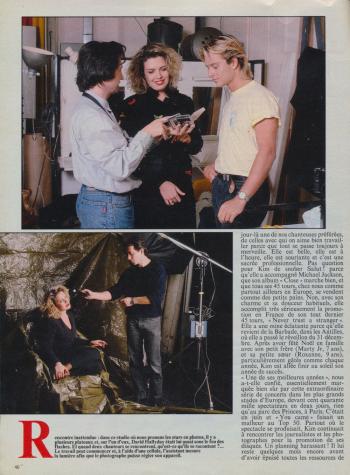 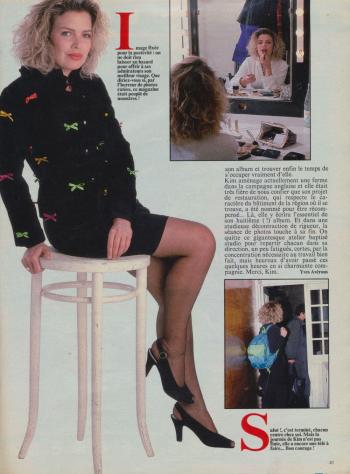