My fear for the future

Why does pop star Kim Wilde spend sleepless nights worrying about the '90s? And what makes Yasmin le Bon, Hayley Mills and Susan Hampshire campaign to save the environment? Geraldine Sheridan reports.

She's the pop star with the world at her feet, the raunchy sex siren of the '80s. But Kim Wilde admits she spends sleepless nights worrying about the future. She's so concerned about the environment she's taking part in Central Television's green programme The Earth Dwellers Guide early next year. She told Mail Plus: "The whole world is dicing with death. It's extremely worrying. The idea that our planet is going to increase in temperature by two or three degrees in the next 50 years scares the hell out of me. God knows what's going to happen."

Kim became interested in green issues touring in Switzerland in 1986. There was a fire at a chemical warehouse and the Rhine was heavily polluted - thousands of fish were killed and 24,000 people were left without drinking water near Bonn, the West German capital. "I was told the extent of the damage and it was horrific," she said. "It really got to me in a personal way because I was there. I talked to someone who said, if you think that's bad, look at acid rain, look at these forests. I thought, my God, what are we doing, it's an absolute nightmare. I got very depressed about it. I thought, there's no point just feeling it's important. I have to do something."

When she came back she joined Greenpeace. "I make sure I send money", she says. "I made myself as aware as I could of environmental issues. I'm sure there are lots of areas I could improve on, though. I'm not pretending to be the model environmental pop star."

Now she's about to sell her car because it can't be converted to take unleaded petrol. She doesn't buy aerosols with CFCs in, she buys Beauty Without Cruelty make-up and recycled toilet paper. "I go as far as I can", she says.

At her office in Hertfordshire there was a wad of paper on a desk in front of her which she uses for writing lyrics. Instead of screwing it up and throwing it in the bin she keeps a scrap file and uses the other side the next time she writes a song.
"I'm naturally responsible", she says. "I don't throw away things I think I could use again. I put all bags under the sink and use them again. It's only in the last two years that most of us have had any opportunity to change things in our own lives."

She realises that's less of a financial burden for her than it is for some, but she believes people have become more aware. "If they're scribbling on pieces of paper there is more understanding that it came from a tree. The public has been very responsive to the whole issue. Governments are slower to change. I heard someone say on television last night it's more important to make little changes than to go totally green. In many cases the first step to preventing something is to get people to know about it. Once they are aware of the facts then they can change things."

She discovered the horrors of badger baiting eight months ago when she was asked to present a telephone answering machine to a local anti badger baiting club. "I read a lot of literature. I try to be as informed as I can." And that's not easyt, she says, for "someone primarily thinking about makin grecords all her life."

In her nine-year career she has gained millions of fans in Europe, as well as the English-speaking world. Her father, Fifties and Sixties heart-throb Marty Wilde, once topped the charts himself.

Kim was the first of four children. She has a ten-year-old sister Roxanne, an eight-year-old brother, Marty, and a couple of nephews, the sons of her brother Ricki.
"I adore young people", she says. "Our legacy will be their headache. I feel we owe it to them and to each other that we pull together."

When she was 11 she wrote to the Prime Minister of Canada saying, "For God's sake stop killing the seals, it's really uncool."
"If you have kids it's a particularly frightening time," she says.

There were recent reports that she was to wed her boyfriend, Johnny Hates Jazz drummer Calvin Hayes, but she denied them. She hopes the day won't dawn when she has to consider not having children because of the state of the environment. "I wouldn't be surprised if I turned on the news tomorrow and heard the most horrific piece of news. I feel like I'm almost waiting for it, expecting it. You hear so much bad stuff. The most alarming thing to me is global warming and the effects it will have. It gives me sleepless nights."

Despite her fears she feels positive about the next decade. Environmental issues have given the world a common focus, she believes. "I think we have to '90s to change things. If we don't, I feel we may have left it too late." 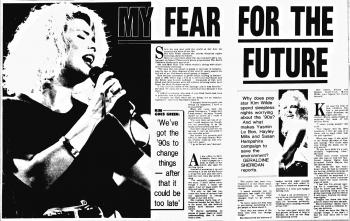