Come on guys, don't be shy

Heads turned as Kim Wilde strolled past the shops in the sunshine, the breeze ruffling her hair. As a pop singer, she was well used to getting lots of attention. She chatted with a pal as they fingered the handpainted silks on display on a craft stall. Kim wondered whether her mum would like a new scarf.

Suddenly a man brushed past her, stopping her dead in her tracks. To Kim he resembled a Greek god. A tall, muscular guy with a mop of dark, curly hair and a prominent nose, he attracted her in a way she had rarely known.

'Just look at him', she gasped, turning to her friend and giggling. 'Isn't he gorgeous?' Dressed in a pair of paint-spattered jeans and a scruffy sweatshirt, the stranger was hardly smart or debonair. Kim took another lingering look as the stranger dashed into a shop that was being renovated. He was one of the workmen.

'That's my kind of man', she confided. 'I'd love to meet someone like that, someone ordinary.' As they walked on towards the shop in London's Covent Garden, her friend coaxed her to go up to him and say hello. Instead Kim blushed scarlet and hurried past. 'What on earth would I say?', she panicked. 'He'd think I was mad.'

In the shop the young builder turned to his workmates. 'I think I've just bumped into that Kim Wilde', he said. 'Nah, you're fantasising, mate', they laughed at him. 'Mind you, she's a bit of all right, isn't she? Anyway, if it was Kim Wilde, you wouldn't get very fast with her'.

That, as 30-year-old Kim sadly acknowledges, is her problem. Since the breakup of her romance with Johnny Hates Jazz star Calvin Hayes a year ago, there is no new man in her life. Men are scared of chatting her up. And, being naturally shy, she simply hasn't the nerve to ask someone for a date. Even with 20 hit singles to her name, she dislikes the glitz of showbusiness parties and prefers to spend evenings alone at her home in the countryside north of London.

The 400-year-old luxury converted barn was Kim's hideaway after her relationship with Calvin ended. For months she didn't want to see friends. During that period her weight ballooned as she found comfort in food.

'It was a very painful time', she says. 'It changed me and I must admit I wasn't a particularly nice person. It struck home one day when I found myself being a real cow to someone I love very much and I knew then that things had to be different.'

That someone was her dad Marty, the Fifties pop star, and it upset Kim to see the hurt she caused. 'I realised that I had got a lot of things wrong', she says. 'What made it harder was that my family and Calvin's family were close.'

Calvin's record-producer father Mickie Most had been friendly with Kim's parents for years. 'You don't break off ties with someone who has been close for a long time and not feel pain', she says. 'It was time to grow and change a lot of things in my life. I sat down one day and took a long, hard look at myself and my career and I realised how lucky I was to be able to do a job that I love so much.'

So Kim pulled herself together and put herself on a rigorous health regime, which she claims helped to change her outlook.

'I used to always see the negative side of things but these days I am a much more positive person. I'm not actively looking for another man', she insists, 'but if would be nice if someone special did come along now. My ideal man would have to be strong, have a great sense of humour and be very kind. I prefer interesting-looking men. I like nice faces but a man doesn't have to be good-looking to be attractive. I think it would be better if he wasn't well-known because the pressures are much greater if you're both in the public eye. You just can't escape the spotlight.'

On her occasional nights out, Kim is never short of a male partner, but they're always friends or business acquaintances, she says. 'Although there isn't anyone at the moment, you never know what might happen. I'm always expecting the unexpected. One day I'd like to have children because family life is very important to me. With my parents it was love at first sight. I often look at them and sigh and wish that I could be as happy as they are. It could happen for me, I suppose. I hope so.' 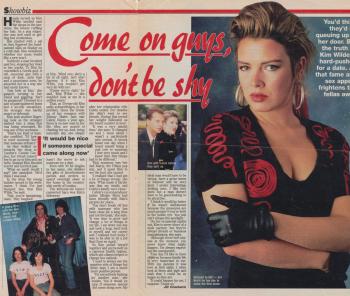