Regulars are used to it, others will discover (but it's time) how Kim Wilde makes a pop record. Love Moves is the title of his new album. But if love moves, the quality of the compositions remains similar to itself (high level) and accomplices - Tony Swain and Ricky Wilde, Kim's brother - remain the same. First single from Love Moves, It's Here, is 100% pure Kim Wilde.

After having released five singles (three Top 10) from her previous album - Close - after having assured herself of becoming the opening act for Michael Jackson, Kim Wilde remains faithful to her classic pop style. She worked in her own studio for the majority of the music on this record, although it remains very dancing, stands out from current trends, by refusing to drown in technology. "All my songs are born on a piano or guitar, frankly, we can not do without the good old methods," she said! 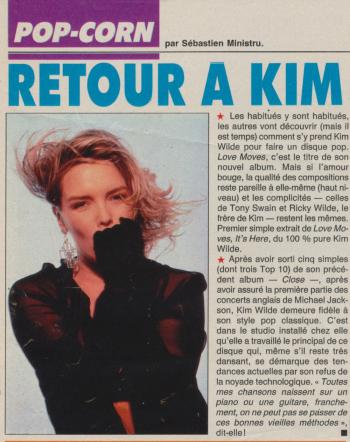