Date
1 January 1990
Published in
[unknown] (France)
Kids in America, in 1981, was her first hit. Of this new pop wave of the beginning of the decade, she is a rare, if not the only one, to have imposed herself, not only with her songs but with her style. It's more important, but even if you call Kim Wilde, there is always something to prove. Two years after Close, a mine of success, and still with the support of his father, Marty Wilde (idol of the 50s), and the complicity of his brother, Ricky Wilde, composer and producer, Kim returns with Love Moves, an album which exudes the talent of a mature singer. Interview with a pro pop.
Ten years after your first success, you still cannot say that you are making concessions to fashion, you remain faithful to the Ricky-Kim Wilde style.
We have always worked according to our own system, we have our own studio outside London and act rather as freelancers. That said, we are not closed to outside influences but, between Ricky and me, there is this relationship of trust that remains unique. We no longer need to make so many concessions. As for the style, I hope it exists and I am very proud if anyone can say it. But, you know, we are too involved in our work to be able to do this kind of thinking.

The B side of the new single takes Somedy, one of the successes of the album. It's a song that talks about a universe of dreams from which it is very difficult to detach. Is that a song you wrote, does it sound like you?
It happened to everyone ... When you are young, you create such perfect life situations: as you go along, disappointments start to happen. Life is never as perfect as in childhood dreams, since it is a sad song about growing up, facing reality. Me, I would say that I have my left foot in reality and my right foot in fantasies and these are the two best places where they can be.

And the song In Hollywood, let's talk about it. What is happening there seems to scare you ...
No, it's a very social place. The song reflects my perception of Hollywood more than my experience. What I find really terrible, are the stories of couples publicized until the nightmare. I always hated this idea, the people who were their private life in the newspapers, it is a lack of respect for each other. I have often been asked to pose with my boyfriend for photos, I have always refused. What feelings can still be precious after that? A photo represents nothing and especially not the reality of a relationship between a man and a woman. 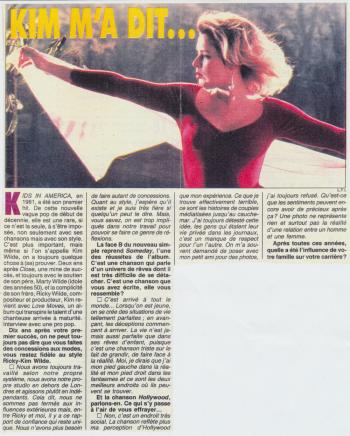