Kim Wilde, who became big thanks to playing on Michael Jackson's 1988 tour. In France this autumn, her new show will pass through Japan and the great capitals of Europe.

Blonde and sulky, ten years ago the beautiful Englishwoman blasts her hits to the top of the charts. Ten years, seven albums and so many successes, Kim Wilde has established herself in a rather personal style, halfway between rock and variety. It must be said that the singer has who to hold. His father, Marty Wilde, was one of the pioneers of English rock, a nicely chubby angel face that bequeathed Kim's curves and sounds sex appeal. A cocktail that makes a fly. Chosen by Michael Jackson for the first part of his European tour, Kim Wilde succeeded in seducing a public who, not knowing it, could have reduced his performance to a disaster. "It terrified me," she remembers, "to play in front of an enormous audience that was not mine, but I had to be good, and all the conditions had been met for me to be. The advantage of interpreting only hits, a handful of titles that had really done very well. "

The importance of the stage

Today, Kim Wilde only realizes the tremendous possibilities offered by this tour. "Two years later, we keep talking about it." And even if her contacts with the funky star were somewhat restricted (twenty minutes in a first appointment, six weeks before the tour), it is there, no doubt, that she decided to play live more.
"So far, I have neglected the tours to dedicate myself to the making of albums, to the elaboration of texts and music, but for my career to go farther, I have to make more tours, and That I do it more thoroughly than in the past. "
Started this month in London, a new show crowns the release, last spring, of the album 'Love Moves'. "But I'll sing in small halls," she says, "and it's going to be pretty good for 10,000 people, and that's where my audience is waiting for me, not in mega-concerts ..."

In her suitcases, as usual, the singer will have her little world around her. The musicians, the technical team, and his family, the real one. Because the Kim Wilde system works like a big family SME, with father, Marty, and brother Ricky, who composes the music and produces all the albums of the big sister. It is him, moreover, that his father had decided to push towards the conson of the early 70s. Between twelve and seventeen years, he realizes several discs produced by Marty, with in the chorus the young Kim, more attracted by the arts and especially painting. Until she in turn, at nineteen, her first model. The famous Mickie Most, boss of Rak Records, immediately signed a contract to him, and the single Kids in America, launched in January 1981, very quickly pulverizes sales records in Great Britain. Marty becomes his lyricist, Ricky his producer, and his mother Joyce ensures the management.
Since then, Kim Wilde writes more and more his texts, participates in the elaboration of the musics, and would like to co-produce his own albums. Will she fly one day with her own wings? "On tour," she says, "we feel very lonely and isolated, and it's really nice to have someone close to you. My family organizes the business aspect of my work and is involved. It secures me, it makes me feel stronger, but it does not prevent me from having my autonomy in relation to it." 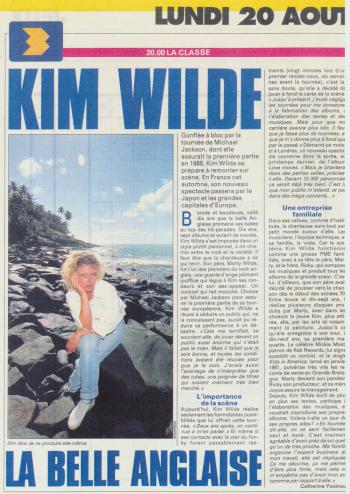