Kim Wilde scored her first monster hit ten years ago with "Kids in America". it was the first a long string of pop hits performed by Kim and composed by her brother Ricki and father Marty Wilde, one of the first ever British rock stars. With the singles "Water on glass" and "Cambodia", Kim Wilde showed the world that the Wilde family talent was still going strong. In 1983 Kim was awarded the title of Best British Female Artist. Her cover of the Supremes' "You keep me hangin' on", an enormous hit in America and Australia, permanently established her among the ranks of the top international pop stars. Since then Kim has had the opportunity to work with uch universal talents as producer Rod "Thriller" Temperton and to tour with Michael Jackson. These recent experiences and her star status have given her the confidence to broaden her artistic talents to writing her own songs. Kim's successful artistic evolution as a songwriter can be heard on her latest album "Love moves". 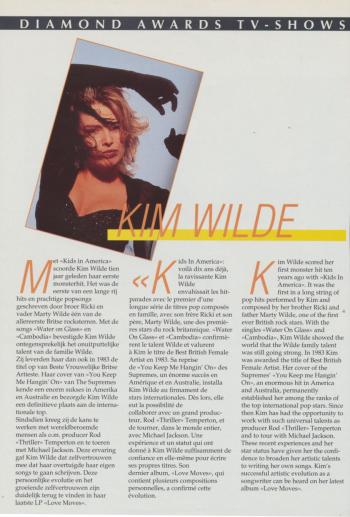