Flashback to 1981, it moves in the tops. A flock of 'popeuses' and 'rockeuses' has been displayed regularly for some time at their peak (Deborah Harry with her group Blondie, Chryssie Hynde with the pretenders, Olivia Newton-John, Pat Benatar ... Others arrive there 1981 is the year when Kim Carnes explodes with 'Bette Davis eyes', Sheena Easton with 'Morning train', Kim Wilde with 'Kids in America' ... Ten years after the pretty Kim is still in the race (which is not really the case with his girlfriends ...) Here is a performance that deserved an A to Z in Star Music, right?

B for Beauty. Her little air of Brigitte Bardot, her 'glamor' side, her sulky face ... All this allows Kim to be unanimous on this plan. Well almost, because some find it a little too coated. Take it easy on Kim's sweets?

C like Chiswick. The city where she was born. A small town located north of London.

E for Children. Kim Wilde thinks about it ... She would like to have at least two children.

G for Gazette. Kim Wilde does not make them happy. She is extremely discreet about her private life. So you never see her in social evenings, on the arm of a boyfriend.

H for Hobbies. They are not 'spectacular', Kim Wilde likes above all to take care of her house (flowers especially), to go shopping, to be with family. She also likes books, horror movies, painting (she sometimes plays with a paintbrush!) Cooking, wine and of course she loves to sing!

I like Influences. Kim Wilde grew up listening to these Beach Boys, Simon & Garfunkel, Kraftwerk, Joris Mitchell and especially Elvis Presley who for her is the greatest.

J for Junior. A British singer she knows well, since they recorded two songs like 'Another step' and 'Hey mister Heartache'.

K for 'Kids in America'. Kim Wilde did not row. She recorded very young and her first try ('Kids in America' therefore) was the right one. This nervous and touting song has rather aged well.

L for longevity. Kim Wilde can take pride in being the owner of a career spanning ten years. Everything was not always for the best in the best of all possible worlds (the years 1984 and 1985 we were tough, without tube ...) but finally we can say that the career of Kim Wilde is a great success!

M for Marty his dad. It had a definite success in Great Britain during the fifties. Her biggest hits are 'Endless sleep' and 'Teenager in love'. Today he doesn't sing anymore, he's the girl producer!

N for novelty. Kim Wilde announced to one of our daily newspapers that she was already thinking about her next album. She would have contacted several big names....

O for ostentatious. I said Kim Wilde is a discreet girl, even in terms of looks. She often wears sexy outfits but not so ostentatious.

P for the first parts. Kim Wilde is popular enough for ... you. Of course, she did it several times. But the fact remains that she performed the first part of a part (oh my!) Of gigantic Mickael Jackson's world tour (that of 1988) and that she did it again soon after with David Bowie.

Q for Eighty-three! A good year for Kim Wilde, since this year she received the BPI for the best British singer.

R for Ricky Wilde. His brother. Kim owes him a lot since he is his song supplier!

S for scene: Kim Wilde sang at the Olympia, at the Zenith, at the Baltart Pavilion, at the Parc des Princes (with Michael Jackson). She now dreams of singing at the Elysee Montmartre.

T for Tops. Since its creation at dusk in 1984, Kim Wilde has been classified with four titles: 'You keep me hanging on' (nineteenth in February 1987), 'You came' (fifth in September 1988), 'Never trust a stranger' (twentieth in January 1989) 'Can't get enough (of your love)' (twenty-first in last September).

U for USA, Kim Wilde never shone ... me hanging on '. With her other titles she had to be satisfied with esteem success.

V for Voulzy. Laurent Voulzy, a singer who because of her has trouble sleeping! Laurent Voulzy dedicated a song to the singer in 1986: 'The nights without Kim Wilde' which appears on the same 45 rpm record as 'Belle ile en mer, Marie Galante'.

W for World in perfect harmony. His new single single like 'Can't get enough' from the album 'Love moves'.

X for X you know the 8 movies! Kim Wilde has often declared that she would like to make films. But the directors and the screenwriters never thought of her ... In short, all that to tell you that you will never see Kim Wilde at night in encrypted on Canal Plus!

Z for Zodiac, Kim Wilde is a Scorpio. 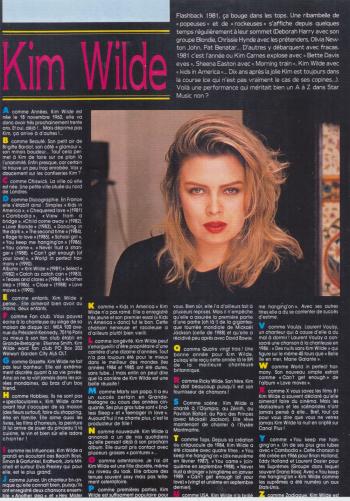