Kim Wilde about 10 years of interviews: 'Once I threw a journalist out'

At the end of this year Kim Wilde celebrates her tenth anniversary as an artist. In those ten years she has done a lot of interviews and answered many questions. Which did she like best and which were the worst? In short, an interview about interviews, with as an extra ten questions she has never answered in those ten years.

Do you like doing interviews?
Some I do. But it does depend on what is asked. And also how I feel. When I feel good, I enjoy it, but when I feel uncertain it's scary. You feel vulnerable and that doesn't feel good.

How do you feel now?
I feel fine today. You're lucky, because until last week I felt horrible. I did a few interviews then and I'm really curious how they turned out. It wouldn't surprise me if they thought I was the saddest being on earth.

What do you like to talk about the most?
About music and my brothers and sister. And about music in the charts.

Do you remember your first interview?
No.

Okay then, what influence did you mother have on you?
Like most mothers and daughters, she looks through all the shit. She is very 'normal' and 'smart'.

Have you ever ended an interview prematurely?
Yes, once, I don't know where it was and whether it was just the wrong day in the month or something, I don't know, but I had a very bad feeling with that man; I had the feeling he didn't think much of me. It wasn't what he asked, but the way he asked it. I asked him to stop the tape. Why? he asked. Because you don't like me and I don't enjoy talking with you. So f... off. He protested a little and then he went away.

Kim, you have had to endure a lot of questions during your career, probably a lot of the same, so I'd like to ask you 10 questions you have never been posed before.

1. If you would die today what would you most regret not having said and to whom?
It's true, I haven't heard this question before. I think you can never tell people around you enough how much they mean to you. Maybe I would regret that. But on the other hand I think I wouldn't die full of guilt, because I know they know. I give a lot, but it's never enough.

2. What are the three biggest risks for life on earth?
People, people and people. Although we know that children in the vicinity of a nuclear reactor get leukemia more often, we still build those things. To give an example.
What causes this in humans, do you think?
A person lives 70 years. If they would live longer, they might not do it.

3. How would you like to grow old?
Busy. I need something to do. I can hardly imagine having nothing to do. It doesn't matter what it is, I can do anything.

4. If you would have to make up a headline for this article?
It wouldn't be something with 'Wild' or 'Wonderful'. 'Kim Wilde saves the world', haha.

5. Do you remember how you heard about the flowers and the bees for the first time?
Yes, it was in primary school, I was 8 or 9. We had slides and my teacher, whom I loved (he has now passed away, but back then he was like a father to me) told the story. But even from him I felt it was disgusting. I remember all the girls had something like: I would never let that happen to me. Because we hated all the boys. The thought of that happening was unbelievable to us. Although my parents weren't muted about it, they were afraid to say too much about it, but I learned a lot from my horrible friends in school. My parents could have been more open about sex. I stimulate them to be more open towards Roxanne and Marty.

6. Have you ever done something illegal?
I probably have. Nothing surprising. I ran through a red light once. The police caught me twice.

7. How would you like to look back on your life?
I hope that when I look back I will see more good things than just my career, another career, a different life, it doesn't matter. The sad thing about getting older is that you see your friends pass away. I don't look forward to that. But I hope when I look back, I'll be amazed by myself.

8. When you look back on yourself as a 16-year old and you know what you have done since then, are you surprised then?
Sure. If I were 16 now and know what I would achieve later, I would certainly not believe it.

9. What was the best thing you ever did in your life?
My mother would probably say that that was when she miscarried a couple of times after another. And she would say that it became obvious then how 'good' I was, to stay with her as much as possible and to support her. And by taking care of my father and brother when she was in the hospital. That was hard work. She often says that to me. I never realised it that much, how important I was for her, until she told me, which was a long time afterwards.

10. Suppose you would wake up tomorrow and have a quality or character trait you don't have now, which would you want it to be?
I have it a little now, but I wish I always had it. Now it just comes and goes. It's being unafraid of anything. I usually have that, but sometimes it's gone and it's usually in the moments I need it the most. 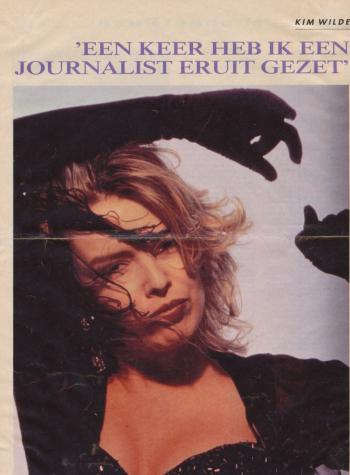 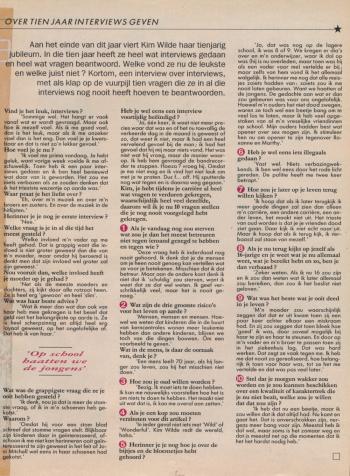