Kim Wilde after the split with Calvin Hayes: 'After a week the worst pain is gone, but the scars stay'

Just when musically things are going well with Kim Wilde, she is going through rough days. Her relationship with Calvin Hayes (Johnny Hates Jazz) ended after years and Kim is left behind with the pain. She is brave although she has a hard time with it. That is obvious in the talk we had with her.

It seems like yesterday when you were in the charts with 'Kids in America' and 'Cambodia', but in fact those songs are many years old. Only now you break the silence. Why?
In fact it was never silent around me. It just seemed that way from the outside. Especially in Europe everyone thought I'd vanished off the face of the earth. I didn't release new singles and I didn't tour. It was a conscious choice, because I wanted to diminish my popularity.

Why?
Because I didn't have a life of my own anymore. I was dragged left to right and even didn't have the chance to work on new songs anymore. That affected my system so much, that I was traumatised. When I was 23 or 24 I suddenly felt I was a no-one. I got blamed for the fact that I had my father and brother to thank for my success. I started thinking how I could tackle this but the more I thought the more I became convinced that the critics were right.

At a certain point you disappeared from view. What did you do? Take a holiday?
After my last tour I took three weeks off. I went to an exotic place on my own, where I thought as little as possible about my career. It was the first time in years I had a real holiday. But immediately afterwards I took action again. For months I lived like a hermit. I kept away from people and devoted myself to musical study and composing. I wrote stacks of songs. Some good and some bad. But I started to believe in myself as a result. I proved to myself I have enough talent, and that strengthened me to have the courage to sing again in public.

The difference between your current work and the old hits is enormous. You sound a lot more adult and selfassured. The result of this break?
In the first place it's the result of aging. I've grown past my teenage years and I think and feel like an adult woman. Automatically that reflects in my creativity. But I also changed because of writing a lot. When you believe in yourself, others believe in you too. Which isn't to say that I've completely severed all links to the past. My family is still my most precious possession. I always have the feeling that I have grown even closer to them. Ricky has written a few songs for the album again, but I have no problem singing them.

Has the success surprised you? Were you prepared as a girl of 20 to deal with being an idol?
I've got the impression that many people think my emotional crisis of the past few months can be blamed to that. That's nonsense. It was always my dream to get into music. I have never seen anything else at home and all of my youth was geared towards a possible later career. I didn't get into the business by mistake. My father, who was a singer himself, and my brother have moulded me for this career. Studio work, backing vocals, live experience... I could look back to it the very moment my first album came out. And I reacted very sober to all the success at the time. It was a very natural thing for me. Singing is a job just like any other job.

Still a baker has more privacy than a singer...
That depends on the amount to which you give yourself away. I have always kept aware that I wouldn't be absorbed by my career for the full hundred percent. I never turned away from my friends and family. Contrary to that, I have always drawn a line between my profession and what the outside world might know about me on the one hand, and my private life on the other hand. Only my real friends were allowed to know who I am for real. The rest of the world doesn't want to know what I do at home anyway.

Is that the reason why you never fell victim to the tabloids?
Yes. You only become interesting for that kind of people when you want it yourself. Someone like Jerry Hall loves being in the tabloids. She goes to all the jet set parties and has a fight every now and then. It's logical that people start watching you then. I rarely go to premieres and parties. And when I do, like for the premiere of 'Batman', I feel hopelessly lost. I am probably too honest and too shy to sell myself in that way. I am glad, because I think the music is the most important thing. All the rest is unimportant.

Professionally you're doing well again. Privately you're less lucky. Is it hard to deal with the split from Calvin?
I'd rather say as little as possible about it, because it's a matter that concerns only him and me. But I can say that I have a hard time with it. When you share your life with someone for a long time, a split is always hard to deal with. Even if your mind tells you it's for the best. Especially during the first few days I was down. After some time the worst pain disappeared, but the wounds will always be there. I a msure of that. People give me the advice to forget about Calvin as soon as possible and look for someone else, but I can't just do that. The ideas I have about love and faithfullness are maybe very conservative. I am not the type of woman who lives by the day and wants to force things. Love is something that has to grow. For now I just work. That's the only thing I live for right now! 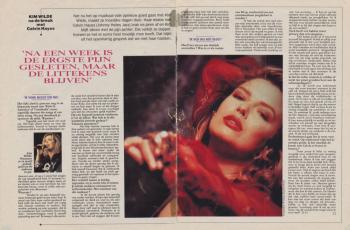