Born
'I was born at St. Mary's Hospital, Chiswick, London, on November 18, 1960. My father is Marty Wilde (famous sixties singer/songwriter) and my mother's name is Joyce. Mum used to be a dancer. She met dad when they worked together on an 'Oh Boy' tv show. It was love at first sight. They were married within a couple of months, and I came along just a year later.

Earliest memory
One of my earliest memories is of being really ill when I was about three or four. I had meningitis - a kind of inflammation of the brain - which in those days was pretty dangerous. I remember being in great pain, being rushed to hospital in an ambulance and having lots of horrible tests done. My mother brought me this beautiful Mary Poppins doll whilst I was recovering, which she made me leave behind for the other kids when I left hospital. I was really pissed off about that.

Family life
I didn't really realise what my father did when I was very young. I remember he was either away, or around the house a lot. I vaguely remember him writing songs, but as I got older, I became more and more interested in his career.
I'm the eldest of four. My brother Ricky is a year younger than me, and we're very close. I also have a younger sister, Roxanne, and brother Marty junior, both of whom I adore.

First school
When I was seven and Ricky six, my parents had to put us both in a boarding school in Dulwich, London. They found themselves having to be away from home a lot at the time, and they thought it would be the best thing for us. It was awful. We hated it. We were so unhappy and miserable. The homesickness wasn't just a mental thing, it was physical too. It made us ill. Luckily, dad's career really began to take off not long afterwards and he bought a lovely house in a little village in Hertfordshire - where we all still live - and he and mum took us out of school after we'd been there two years.

Boys & brownies
Ricky and I were sent to the village primary which was great. I really fancies myself then. I was pretty popular with the boys whom I'd discovered by this time.  I had my first boyfriend when I was nine. His name was Neil. I'm not telling you his surname in case he reads this. I was madly in love though. I went to the Brownies and Guides until I discovered discos. I love camping. In fact the first thing I did when I got my royalties through was to buy a tent! I also loved cycling but became terrified of horses after one ran away with me when I was about 11.

Exams
I got quite a shock when I went to secondary school. I didn't like it at all. Academically, I was average. Actually, more like average to below. My worst subject was Maths. I was hopeless! I liked art though - I was quite good at it - and I spent a year at art college after I left school. I got six 'O' Levels and one 'A' Level, which sounds quite impressive, but they took me a long time to get. I think I'm intelligent, but I'm just not very well informed!

Fat & spotty
I hated adolescence - it was probably the worst time of my life. I'd hate to go through it again. I guess most girls and boys go through that awful confusion. I remember having no confidence about myself or my looks. I thought I was overweight, spotty and that all my friends were prettier and more outgoing than me. They were all right ravers too and I worried because I wasn't.
I got really interested in music in my teens. I had piano lessons. I used to do the cleaning for my teacher to pay for them. Although money has never really been a problem in my family, I had a whole successin of part-time jobs, mostly cleaning, which I'm very good at. I hate it, but I'm very good at it. I was an incredibly moody adolescent. And I was sensitive to a fault. I used to have dreadful rows - mostly with Mum because she was always there, whilst Dad was away a lot. We're also very alike, me and Mum, both physically and mentally. I went through a lot of phases in my teens. There was my tomboy period, my hippy phase and my conservative, square period. I think it's only the last couple of years I've really got it all together. Now, I'm the person I want to be.

Hopes & idols
I always knew I wanted to be a singer. It was always at the back of my mind. I used to do backing vocals for Dad and Ricky, anything to get my oar in.
My two biggest heroes in my teens were Gary Glitter and Elton John. I used to belong to Gary Glitter's fan club, and I liked Elton John because I thought he was really sweet and looked as though he needed looking after.
I had a very happy childhood. But I wouldn't like to live through it again. I'm much happier as an adult. I feel like I've reached some kind of landmark.
I feel great. Life has never been better. 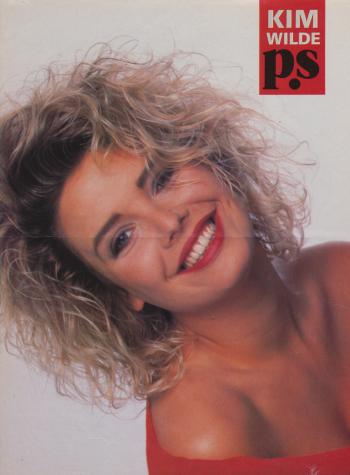 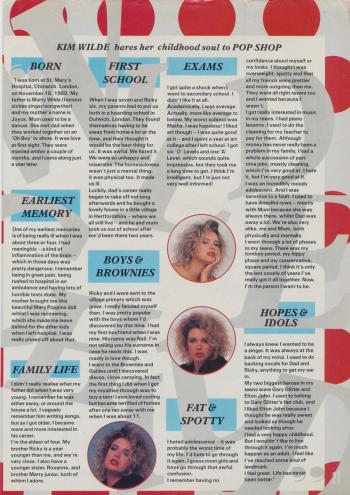