The pop world was stunned to hear this week that Kim Wilde has split up with her boyfriend, Calvin Hayes, keyboard player with Johnny Hates Jazz. When Hello! caught up with Kim in Florence recently, she seemed very happy with her work and life in general. But when it came to talking about Calvin and the possibility of their getting engaged, the singer hinted that their relationship was not all it might have been.

What made you choose Italy to make the video?
My last LP really took off here, which means I get my ego massaged the whole time! No, seriously, I think I like everything about Italy, from the climae and the architecture to the Italian lifestyle. They put the emphasis on the quality of life, enjoying long conversations over leisurely meals and so on. The food's not bad, either!

You seem to spend a lot of time at your flat in St John's Wood yet Calvin only lives round the corner in Primrose Hill. How come you have not moved in together?
That's not something I'm prepared to divulge publicly. Apart from anything else I'm fed up of living in London. As if the traffic isn't bad enough, the security aspect leaves a lot to be desired. I'm afraid I've had a few break-ins.

Didn't you buy a barn in Hertfordshire?
Yes. I've never actually lived there because it is still in the process of being converted. I'm hoping that it will end up as one large room with galleries and things plus two other rooms, one of which I'll use as a studio and another for my painting.

When do you find time to paint?
On holiday, mainly. Earlier this year Calvin and I went to The Grenadines, which are a group of islands south of Barbados in the Carribbean. I did quite a bit of drawing in pastels, including several self-portraits.  I would like to have used one for the album sleeve but they are a bit rude. It was a great trip. I learned how to scuba dive, which frightened the life out of me, and the sea is not pulloted like in Europe. Over here people are risking the lives of themselves and their kids by swimming in the sea.

How did you first meet Calvin?
Through our parents, I suppose. Marty Wilde, my father, is an old music business friend of Mickie Most who founded RAK, the first record company I was signed to. Calvin is Mickie's son so we more or less grew up together. I think it was aways half assumed that we'd end up together.

You will be 30 later this year. Have you never thought of settling down and having children?
I wouldn't want to get married to just to have children. I'd rather get married because I want to be married and you have to make sure it is the right perso. Without a good marriage a child can be at a disadvantage in life. I don't think there's anything wrong with being a single parent if that's what works best for you but I'd rather have a balanced family life. 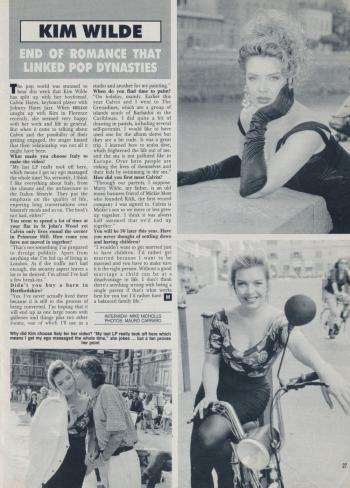