Kim Wilde has had learning time

Kim Wilde looks like a beautiful mature woman, whose face is surrounded by beautiful hair, usually blonde. She will be thirty this year. Kim has changed a lot since ten years ago when she sang hits like 'Kids in America'. But contrary to most singer of that time she is still in the race. Kim still has hits, while she even performed in huge stadiums: supporting Michael Jackson and David Bowie.

When Kim takes a seat across from me her hair is hiding beneath a scarf. Black is the dominant colour in her wardrobe. Pretty as a picture, really. Kim agrees that a lot has changed in the ten years she has been with us as a star. "Some things have remained the same", she says. "I still work with my family, make my music together with Ricki, we have our own studio, we are still independent. I have changed, though. In the beginning I didn't write any of the songs myself. Later when I changed record companies, I started composing. It's as if it gives me the right to be in this business." Kim likes to write together with others. "It is a great way to be with other people and exchange ideas. It's a bit like making a baby together."

Kim looks diffeent than in the beginning of her pop career. "Of course you change between your twentieth and thirtieth", she answers. "It's natural, but it doesn't have anything to do with a conscious planning of image or anything. It does matter where you buy your clothes. I was very young back then. I grew more confident, also because I was more involved with the music. And another thing that was important, was that I was more able to, say, express my feminity."

Kim Wilde has known some lean years as well, she admits. "You know: when I started, I thought making music and being part of the music business was the most important thing. Whether I would be famous or not, that didn't really interest me. I envisioned a career as a backing singer, but then the hits came. I became famous and I loved it. After a few years things went less well and I have to admit things went to my head a little. I felt humiliated: why am I not famous anymore? But then I realised that I was still making music, and that was the most important thing.  I am a bit more down to earth now. Of course, I love success, but I'm also afraid of it, just as much as the day I wouldn't have any hits."

Kim doesn't mind being part of 'the race', as she calls it. "Take Todd Rundgren for instance. He's one of my favourite pop artists of all time, but he's obviously not in the race anymore. He has retreated to his own place and that's why it wouldn't be easy to write songs together with him. I am making commercial pop, you know. The competition of the market. Your records have to be sold, it's a reality you have to deal with. It's not even because of economics, but it's about competing. The good reasons: being part of the race is important, not the winning. I would never be persuaded to a change of course just because the market asks it of me."

Kim doesn't want to discuss the future too much. Movies? "If I see a good script, one that fits me." Future writing partners? "I could surprise you. But nothing is confirmed yet." Dance and house music, influences of which are there on her latest album 'Love moves'? "I love dance music. For me the record could have sounded more like that. I have a very broad taste, I could go in all directions. And why not? I am in music for ten years now, I have had my learning time." 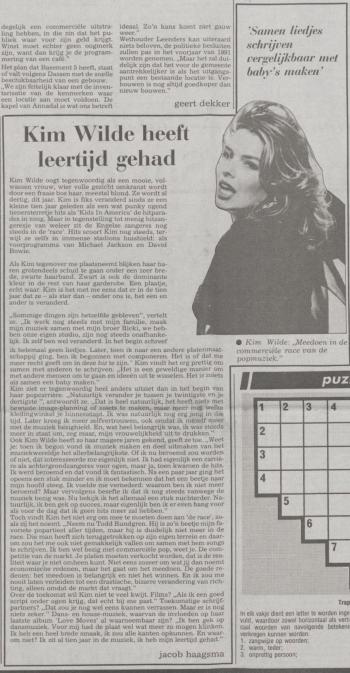