Kim Wilde plays Kylie during her vacuuming: 'All my songs are pages from my diary'

It's not always a fact that nothing happens when there is a silence around an artist. Usually not, in fact. Often it's a quiet before the storm. It looks like the same is true for Kim Wilde. She is doing it for 10 years now and she hasn't had enough. More than that, she wants more. There's always something left to wish for...

So Kim, where have you been all this time?
Over the past year I have been busy making a new record, going in and out of the studio.

Have you succeeded?
Yes. I'm really satisfied with it.

The lp is called 'Love moves', why the title?
Because it's true: love makes you do even bigger things.

Does this come from personal experience?
Of course, everything I write is very personal.

Has 'love' made you into what you are now?
In some way it has, from very different people: my parents, my family, friends, my boyfriend, my girlfriends.

Is 'Love moves' a way of describing the past few years?
In a certain way it is, from the past year. And with some of the subjects I've been busy for a longer time. Those are ideas that have developed. Especially one song, 'Who's to blame?', about environmental problems. Just like 'Stone': I'm really conscious of the fact that things are being destroyed before children have even had the chance to get to know them. It's very possible that by the time I have children of my own, elephants have disappeared. That's the reason for writing that song.

As a sort of memory?
No, just as a confession: I feel just as guilty about these things as you or whoever. We're all responsible after all. The only thing that counts is what we do about it. It's an apology in advance.

What does the record mean to you?
All the songs are like pages from my diary. I have written all the lyrics for this record and they are really personal as a result. But not just the lyrics, also the music has been waiting for the right moment to come out. And I hope that doesn't sound too pretentious.

Is that bad?
Yes, sometimes talking about music can sound really pretentious and that would be bad, because it's important to know that everything is done from an honest perspective.

It can never be pretentious then, can it?
I hope so: that's the reason why I have remained honest. It has been good for me and it's always a constructive, positive aspect to get me through. In a world full of lies and deceit I could never live. Sometimes I think I don't come across as a popstar. I'm not someone to go out every night or who does all kinds of enchanting things. My life isn't a fairytale, no, for others it may even seem boring.

Is that important for you, what others think?
Not really. That's why I've always been open and honest about it.

What do you think of house music?
I'm a pretty big fan of it. I really love De La Soul, Soul II Soul, etc. I buy a lot of these records.

Stock, Aitken & Waterman?
I only like one of their first records. But I'm not as much interested in what they've done recently, Big Fun and such. They must be really nice boys, that's always the thing, they're always really nice. I do like Kylie, I have a lot of cd singles of her and I often play them when I clean the house. She has a certain freshness about her that I find irresistible. In a few weeks I go to her concert, then I'll take my little sister and then we will party.

How old is she?
She is 10. Her name is Roxanne, and she likes Kylie a lot more than she cares to admit. O yes, she's good, but not as good as you are, but I know that she really likes her. Being with her is one of the best things in my life. Sometimes she performs with me in front of the television or something. I also have a wonderful little brother. He is 9, Marty. It's great to say 'brothers'. I have always had one brother - my parents have had children rather late in life again - and now I have two. I love it. I don't see them every day, the live with my mum, but I always carry pictures. I am like a proud parent. I just don't have the fuss.

What did you get from your parents?
She have stimulated me where music is concerned. My mother put us on piano lessons and that's what I'm still very grateful for. I really hated it, because it was rather boring. I like playing by ear, but in retrospect it helped me to develop my own style. My father has also helped me. He used to put us on a chair and say: 'listen, this is beautiful. And then he played me 'Bridge over troubled water', or Chaikowsky. The love for beautiful things. And art, painting, my father felt that was really important. I picked up on all those things, music and painting. I like to paint. It's the most satisfactory thing to do next to music. Looking at life through creative lenses, that makes it better. I can't imagine people living without seeing the beauty in things, but some people seem to be able to.

What would you want to give your children?
Time, lots of time.

Do you want children?
Oh yes, but right now I could never give them time. I don't have them. I would love to be able to combine it with work. I work so hard and I'm also a bit egocentric, that's more important. And when you have children they must come first of course.

If you had them, would you do it different from the way your parents did it?
Maybe I would. I would love to give them the same lessons in life, the love of music and art, for beauty. And a inquiring mind, asking questions and not taking things for granted. I'd love to stimulate them to think about things.

Is there something left to wish for?
Yes, I would love to write a top 5 hit in America for another artist. I Would love to have a Grammy, with just my name on it, not my face. That would be great for my selfconfidence and fantastic for my ego. 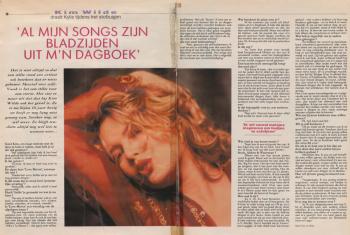