Blondes don't age easily. During the interview Kim Wilde looks into the mirror regularly and feigns nonchalance. She looks a bit fuller than a few years ago, but wants to have her old look back desperately. Her new album, "Love moves" has the same kind of intricacies. Wilde wants to be Kylie Minogue and tries - unfortunately with just as little success - to make synthesizer music a bit more lifelike. Kim will probably never record another "Cambodia". She obviously wrote her future strategy in a different scenario.

Almost ten years ago Kim Wilde had her first hit with "Kids in America". After her father and brother slipped from a prestigious career in pop, Kim Wilde seemed blessed with a firm dosis of sense of reality. In her first interviews she said that she might not stay in the pop world for very long to everyone who wanted to hear it. Whn she is confronted with those words today, she acts as if she doesn't know this. "I never said that. Quite the contrary. I knew that I was working on a very well planned career. Especially the English press holds it against me that I am still around. In my early days I was their favourite pet. New Musical Express put me on their front page. Today I am the dumb blonde, that they laugh about."

NME now puts rappers and hiphop artists on their cover. Are they musicians according to you?
Don't try to get me to talk negatively about rap. It's dynamite. But I am generous enough to concede that it's already delivered a few classics. Neneh Cherry is at the top of my list, but after her there isn't much. I can't form an opinion on that. What I try to do is make beautiful songs, songs that people can sing along to. I know it sounds oldfashioned, but that's my calling.

Would you allow a rapper to include a section of "Cambodia" in his work?
I wouldn't have anything against it. Maybe I'd even feel flattered. But there's little probability that I'd have to think about it. I am too far removed from those people...

Is Jive Bunny allowed to do a cover version?
I would protest against that. Jive Bunny is just out to make fun of everybody. I don't feel I should be part of that.
It's all got to do with respect you've got for yourself and the job after all those years. Five years ago I was in a crisis. The hits didn't come so fast anymore, my father and brother didn't feel me as good as they did and I went from home to live in a flat in London and to find myself. After a long talk with myself I found out that singing is the thing I do best. When I made peace with that thought, I could write my own songs. They weren't big hits, but they gave me more satisfaction. The feeling to see a selfmade song in the charts is much deeper than when you sing someone else's song into the charts.

are you seeing that that less successful period was a blessing?
Of course. What my biggest mistake was? I didn't really make any mistakes. I learned something from everything that was a disappointment at the time. It sounds like a cliche, but it is the truth. You learn from experience. If you never risk anything you don't get burned, but you always stay on the level of mediocrity.

Where are you actually headed with "Love moves"?
I listened to it recently and at the end of it I felt like I'd been on a journey. There are so many different atmospheres on the record that it's almost like a trip. This record is totally me. Every contradiction within me, I can find on "Love moves". I can't live without contradictions. When they're not, I will create them if I have to.
I believe I get closer to the essence of every song. People sing because music brings them together around a subject they all know. It's down to us, the songwriters, to make that recognisable. A good song gives words to the slumbering thoughts of the listener.

Five years ago you said you found the trick to be happy when you're 40: an artistic career and a lot of children. Do you stick to that?
Was I that sensible then? Yeas, I don't change anything about that saying. "Love moves" is the next step in my career. The children will have to wait a while longer. 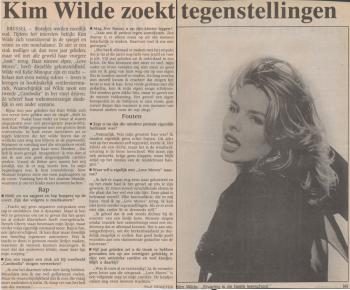