Kim Wilde: she finally found the man of her life

At twenty-nine, Kim Wilde finally puts an end to the impatience of her audience, by offering them her new album, Love Moves, from which is extracted the 45rpm, Can't get enough of your love. And if the blonde British singer is still so sexy, what governs her career is music, of course, but also family and love. A trilogy that she cannot do without.

The environment of Kim-Ann Finley, for the civil status, is certainly not foreign to this vocation. Because the Finleys and the showbiz have always gotten along.

At the dawn of the sixties, Marty, the father, enjoyed real success as a rocker. The mother is a chorister. Faithful to this tradition, Kim, from the age of eight, began to learn the piano, limiting himself to the classical repertoire. She may grow up listening to the Beach Boys as well as Simon and Garfunkel. And she accompanies her father on his tours, thus traveling the world and only attending school during school breaks only.

When, at the age of nineteen, the girl chooses to embark on a career as a singer, the whole family gets involved. She takes the first steps under the leadership of her father who becomes his manager. As for his older brother, Ricky, he is quite simply his artistic director.

What is not to displease him, on the contrary. Kim Wilde appreciates the advice of the two men. Because they are demanding with her, and thanks to their professionalism, she can claim to reach perfection.

Moreover, the success of the first disc, Kids in America, shows that the trio works without false note. Damn it! This true family business is on its way to glory.

At each concert, mom and dad are obviously in the first row. They do not lose a crumb of the show. And a critical discussion follows each performance. They thus help, support and guide their daughter.

Today, Kim assumes her career alone. She left the family home, but she continues to live in London - in the suburbs, more precisely, where she bought a farm - and she spends her leisure time shopping around to decorate her new home. She also plans to install a recording studio in her house. And love is certainly no stranger to this decision.

Because the man in her life is a musician. In fact, Calvin Hayes, of the group Johnny Hates Jazz, shares his existence. As she wished, he is warm, spontaneous, attentive and above all, he does not lack humor. If for a very long time, her loves were often unhappy, today, it seems that this time is definitely over.

She, who feared that life together would not only be a waste of time detrimental to her career, but also an attack on her freedom, is no longer afraid of anything. With Calvin, she feels strong and has a great passion.

She satisfies in this point the dominant character of her astrological sign, because, like all Scorpio, she is of a temperament full of ardor and generosity. It is her admirers who are likely to be disappointed! Their nights, like that of Laurent Voulzy, will remain without Kim Wilde. 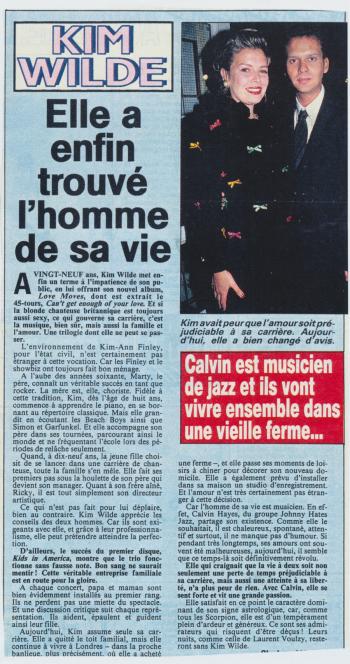