Kim Wilde surprised about her own perseverance: "My mother keeps me healthy"

AMSTERDAM/LONDON - Dressed in black from head to toe, a scarf around her wild manes of hair, the full lips unpainted. Put a plastic bag in her hand and I can go to the Albert Cuyp market with her. Kim doesn't look like someone who would call her new album 'Love moves'. During a previous meeting she would have been just as happy as a fisherman's daughter, if her parental home had been a house on the cliffs in Cornwall, instead of central London. And if her mum would have had a bed & breakfast in Devon, instead of running her husband Marty Wilde's career, Kim would have been happy as well.

Now that she is 'a kind of star' as she puts it herself, surprise that she kept at it for so long seems to be her main character trait. And then she's probably tired most of the time. And her current promo tour is just halfway done.
"When I was special guest of Michael Jackson, I worked twice as hard as I did before - interviews during the day, playing live for 30 minutes during the evening - but I didn't get tired. I shamelessly profited from the fact that Michael couldn't be approached. I did feel like a kind of prostitute at some point - well, a luxury call girl - when I saw hundreds of people during press conferences where Michael didn't even show his face and I knew I would work with at least ten of them during the day. But then this job has always had something callgirlish."

After a short fit of laughter she continues: "I am more proud of the fact that I kept at it for so long than I am of my artistic achievements. I had no idea what I was doing when I started out with 'Kids in America'. I was born 'middle class', but I had the 'punk' mentality of Johnny Rotten and Joe Strummer as well: dinosaurs like Yes and Genesis didn't have anything relevant to say to us and the kids of our time, and we would just follow in their footsteps. Johnny and Joe have been forgotten by now, but Phil Collins and Peter Gabriel are still here. I went Billy Idol's way more or less."

"Now that I think of it, the female Billy Idol is not a bad place to be. I am the only woman from the top 10 of ten years ago who's still there. I tend to think that's more normal than it actually is, but that's self protection more than anything. I have already been on the edge of a nervous breakdown once. Too much of anything isn't good for a person. Nothing and no-one, not even a loving family and a family tradition, can prepare you for fame and fortune."

Kim says that her mother played the most crucial part in safeguarding her mental health. "I still fight with her ergularly but I have to confess that she's right more often than I am. She warns me for certain people. When the inner barometer is still on blue skies, her bullshit detector is already in the red. Sometimes two years pass before she is proved right. Then a notice arrives with the mail or a lawyer calls with the news that I should prepare for a lawsuit that could cost me years and a half million in damages. I bang my head against the door out of pure frustration, then I go to my mum and read the fine print."

"My mother trusts literally no-one. I don't want to live like that. I'd prefer to pay the price. No matter how much damage my naivity did, I can't think of trusting people as a bad trait. And then there are these fights with my mum about the interpretation of the hows and whys of someones 'betrayel'. My mother is like Thatcher. She is always right, everyone else is wrong."

Although she is the pop media's favourite, a French colleague had to experience recently that the love isn't always mutual.
"I had a series of interviews in Paris. My relationship had just ended. I considered myself as being 'on the market' but because of all the work I hadn't been able to do anything about it. With the last journalist we talked nonstop about the battle between the sexes, love, sex, trust... everything a normal person would talk about after years of friendship. Back in my hotel room I wondered: how could I have been so stupid? The interview is guaranteed to take on a life of its own. Every teenage magazine will buy that. Until I realised I started talking this way because I wanted him... For the first time I decided to go to the bar and get my hormones back in order or sedate them at least."

"To my surprise he was in the bar. No, nothing came of it. But only because I turned to my last line of defence: it was so unprofessional! After hours I was alone in my hotel bed, thinking my mum would have been so proud of me. I just hope that he considers it typical British reservedness... haha..."

"The British love tragic heroes. Oscar Wilde, Lord Byron. And whoever isn't tragic is made out to be tragic. It seems like the British, more than other people, continually want to be confirmed in what ordinary people already know: fame and fortune don't buy happiness. I noticed how much I'd strayed from that insight. I'm toying with the idea of doing something with New Order. You know New Order are the survivors of Joy Division. I thought they were partly psychopaths, who would destroy themselves after destroying those around them. But I met happy chaps on the countryside instead of lost punks from the slums in Manchester. Their life lesson was: don't live your image, it's deadly. Wise words!"

"My mother would have liked New Order! If I work with New Order, I will ask about their technical approach, while most people would like me to go the other way. No, you're not the only one who wants to get rid of the computers and the doubled voices on my records. I flirted with 'soul' in 'I can't say goodbye', the last song on Love Moves. I was very satisfied with myself, until I heard the semi-acoustic demos I made at home with my brother Ricki and my father Marty. Much more direct, more intimate as well. I shouldn't really tell you this, because the public loves 'I can't say goodbye', double tracked voices and all."

But doesn't the British public like anything you do? Isn't she part of the furniture in English rock & roll?
"What a strange compliment! I shall take it as one anyway. Because Sheena Easton will never be part of the furniture. Too little heart and soul, too much ambition, to be loved by the general public. Do you know who are part of the furniture? Cilla Black and Lulu! But what is called 'cabaret' in our country? I shouldn't think of it. Playing in converted cinemas, before middle aged housewifes, singing along to your 30 year old hits and ordering another sherry. But it is the British way to grow old graciously in this business."

"My own father doesn't do it another way. But it is getting more difficult for him. He is almost ready for a 9 to 5 job. I hope I can live a 'normal' life when I'm 40. You become very unattached from reality in this job. The most often used 'medicine' is to surround yourself with people in the same position, to feel as normal as you can."

"When I see my father eating breakfast after noon sometimes, I think more often than not: what a life! When my parents suggested I would sing songs when I would grow up, I became hysterical. Anything but that! But I didn't just do what my father did, I also join him for breakfast! And he had a wife and kids at my age. I have no-one. The longer I lead this life, the less I am suited for 'normalcy'. You're right about that. It's as if I'm hearing my father!" 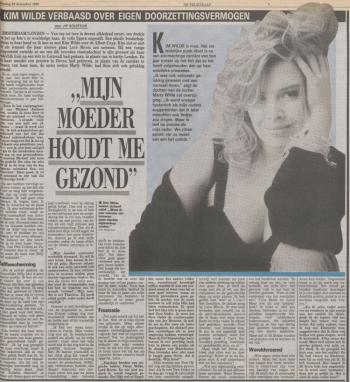