Kim's on song for new album!

She's the girl who sang with Michael Jackson, yet barely got to meet the star. Not that it worries Kim Wilde. Although it's 10 years since she first topped the charts, she gives the impression that every success is a happy surprise.

Her latest single is about to be released, a new album is due in June, and she is thrilled that this will be the first on which she has co-written every song. She says: "I've written 20 or 30 songs this year. I've been very prolific. But it's been a gradual thing. When I first started putting songs on my albums I thought it was a bit of a fluke - they were OK, but they didn't set the world on fire. Now I'm more confident."

The single has been co-written with her brother Ricky, and she says: "I'm really proud of it, it's a very honest, optimistic song, very much about where my heart's at, at the moment."

If it and the album take off then she will go on tour, probably in the autrumn. It's something that she loves. "Each tour is totally different. You have more experience on each one and it's always an adventure. The Michael Jackson tour really inspired me. I enjoyed it so much even though I was there performing to an audience who had paid to see him, not me. I learned a lot about performing: singing live, making the set interesting, how to communicate with an audience and what to expect from them. Also I learned a lot from Michael, above all from his professionalism."

It must have been long-distance learning, however, as she spent no more than a couple of minutes in the presence of the star himself. She admits: "I didn't see him at all except for one situation, a photo session together. It was arranged to get round the fact that he hadn't had any direct contact with me for three weeks on the tour, but I was so pleased to be there that I didn't care. I just thought that's the way he is, and I didn't feel snubbed. After all, I wasn't exactly expecting normal behaviour. But when we did meet he was very polite and gentle - he did seem shy and very fiercely protective of his privacy."

The reclusive star did, however, spend time with Kim's little brother and sister, whom he made a special request to meet. "I said what about me? Then I thought they are good ambassadors for me and I told them, 'Don't forget to tell him I'm great. My sister came back and she told me, 'He said something nice about you Kim'. He told her she was as cute as I was, and I swanned around with my ego suitably massaged for a little while."

Kim joined the Jackson entourage for 31 dates in Europe and around the UK. She was quite a success, she says, because "predominantly the audiences were in Europe where I have a solid following." She adds: "We went down extremely well, which I think surprised the Americans a lot because I'm not a celebrity in America like Sheena Easton is, for example." 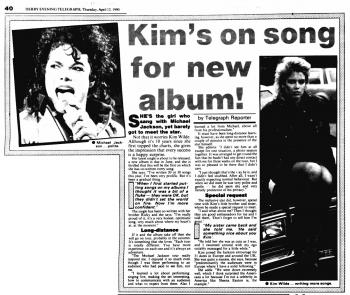