Pop veteran Cliff Richard turned 50 last month, and that had to be celebrated. The most original present came from Elton John. He gave Cliff 50 bottles of the best wine and said that he has to drink one every week in the coming year. 'Now that I stopped drinking you will have to take over', Elton added.
Cliff was really happy with it. 'It's great wine and I love wine.' Cliff also performed on his birthday, after which some 12.000 fans sang 'Happy Birthday' for him. Then a giant inflatable cake with 50 enormous candles appeared at the edge of the stage.
'I felt like the Queen, as official as everything happened'. On the party Kim Wilde appeared to congratulate Cliff. 'I hope that I will still look as young as Cliff on my fiftieth birthday', Kim said. 'But honestly I'd rather not think about that yet.' 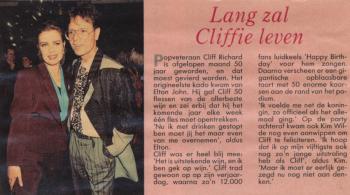