Kim Wilde looks like a beautiful, adult woman these days, whose full face is surrounded by beautiful hair - mostly blonde. She is turning thirty already, this year. Kim has changed a lot since she sang 'Kids in America' into the charts ten years ago. But contrary to many singers of that time she is still in the race. Kim still scores hits, while she even performs in huge stadiums: as special guest of Michael Jackson and David Bowie.

When Kim takes her place across from me her hair hides under a black hairband. Black is also the colour of the rest of her outfit. A real pretty picture. Kim agrees with me that many things have changed in the ten years that she has been with us as a star.

"Some things have stayed the same", she says. "I still work with my family, make my music together with my brother Ricki, we have our own studio, we're still independent. I myself have changed. In the beginning I didn't write any songs. Later, when I moved to a different record company, I started composing. It's just as if it gives me more of a right to be in the music business." Kim finds it very nice to write with others. "It's a great way to work with people and to exchange ideas. It's something like creating a baby".

While she drinks from her mineral water I notice that she looks very different these days, when compared to the old days: the Marilyn Monroe-ish vamp in the clips of her hits, that followed after a few years of less success and less exposure, seem very different from the teenage girl of the old days. "Of course you change between your twentieth and your thirtieth anniversary", she answers. "It's very natural, it's got nothing to do with image planning or something like that, but rather which clothing store you go to. Ten years ago I looked like a new wave girl, with the hair and everything. It was that time and I am a product of my time, aren't I?"

"I was very young at the time. Later I got more selfaware, also because I got involved in the music more. And, what's more important, I was increasingly able to express my femininity, so to speak. I got more aware of my sexuality. Many people saw me as sexy from the beginning, but I didn't. "

"My idea of a sexy woman was Debbie Harry. She approached her sexuality in a very aggressive manner, she always wore these very short skirts. I wasn't like that at all, even if it's because I only wore trousers. It took me a couple of years before I could express my femininity in a more mature way."

Kim Wilde has had her quiet times, she says after another sip of mineral water. "You know: when I started I felt making music and being part of the music world was the most important thing. Whether I'd be famous or not, that didn't interest me. I was looking for a career as backing singer, but then the hits came. I got famous and I felt it was fantastic."

"After a few years things went downhill a bit, and I have to admit that it shocked me a little. I felt humiliated: why wasn't I famous anymore? But then I realised it was still all about the music. Now I am a bit more down to earth about it. Sure, I love success, but I fear it as much as the day I stop having it."

Still Kim doesn't mind doing 'the race', as she calls it. "Take Todd Rundgren for instance. He's my favourite pop artist of all times, but he isn't in the race at all. The man has retired to his own terrain and that's why I would find it hard to write songs together with him. I am working in the commercial pop field, you know. Your records have to be sold, that's reality. It's not even because of economical reasons, but because of simply taking part. The good reasons: taking part is important, not the winning. I would never be seduced into a strange change in direction, just because the market asks this from me."

The bottle of mineral water is almost empty, the tape almost full, the girl from the record company begins to ask for the end of our conversation. Even shortly before the end Kim isn't seduced into big confidential statements about the future of her career. Films? "If I get a good script, something that befits me." Future writing partners? "You could be surprised. But nothing's planned."

Dance and house music, influences of which are obvious on her latest album 'Love Moves'? "I love dance music. I would have loved the album to sound even more like that. I have a very broad taste, I could go every way. Why not? I'm in music now for ten years, I have had my studying days. 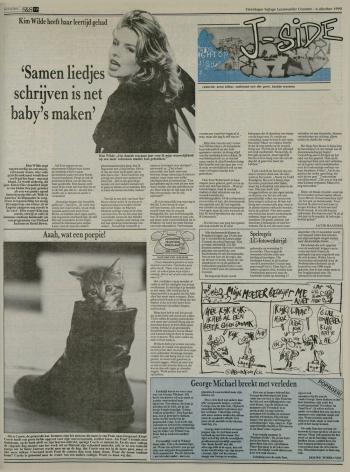