Love Moves is the title of his new album. Coincidence: she just broke up with her boyfriend.

For ten years now she has been dragging her sweet pout on the paths of glory, today, the golden helmet of rock is no longer a lolita, but to see it as to listen to it one can go to the evidence: mature and mature, it is all the more attractive.

After Mick Jagger, it is probably Kim Wilde who has the most famous pout in rock. Except that even if it emanates an indisputable sensuality of the lip of the singer of the Stones, it is still that of his colleague who is the most edible. Do your accounts and you will see that, all things considered, blondes as accortal as the pretty Kim do not jostle each other that much in the profession.
A rarity that is all the more precious since entering the thirties the singer is more luscious than ever, no offense to the ignorant who believe it is spiritual to mock her curves. This maturity is all the more exciting because it is found on the mental plane. No more wild airs and mines of hunted girl: Kim Wilde is an adult woman who knows what she wants. The proof: her new album Love Moves, for which she took her pen as a great to write her own songs ...

Why start writing? Is it to escape your image of sex symbol?
No ... In fact, writing and literature are things that have interested me for a long time. I fully assume my glamor side, and I don't particularly want to change my image. Do not think above all that I take myself seriously because I start to write my own texts ...

Have you been writing for a long time?
I have always written poems, short stories, songs. One day, I heard a song on the radio and I thought I could do much better ...

Where do you find your inspiration?
No matter where and how. Sometimes it's very personal and intimate, but it can also be completely harmless. Everyone has to find out where it comes from. I think song is a very special medium.

In 'World in perfect harmony', your last title, the ecological message is quite clear ...
In fact, there are two songs in the album that deal with the environmental problem. The first is quite pessimistic while 'World In Perfect Harmony' is more positive. I believe that it conveys a certain hope, even if the text is not very realistic and even quite idealist. You would have to be completely crazy not to feel concerned by everything that is happening at the moment.

In most of your photos, you are seen pouting. Are you really sulky by nature?
When I started posing for the photographers, I absolutely didn't want to be presented as a standard product. As I hated smiling on command, I found myself with this rather distant and cold image.

When in you as a kind of Bardot rock, do you like it?
This is typically the kind of hook that journalists find to sell their magazine. That said, I used journalists the same way they used me.

There is a song called 'It's Here' in which you praise inner beauty. A priori, however, one has the impression that appearance is essential for you.
Everyone knows that hidden beauty is most important. But my profession obliges me to take particular care of my physical appearance. Well, I still think that I would pay attention to my look, even if I was not a pop singer, because, honestly, I am terribly flirtatious.

Are you afraid of aging?
No. I notice as I get older that I am happier, more satisfied with what I do. And I no longer make the same mistakes thanks to the accumulated experiences. Honestly, growing old even brings me some form of inner peace ...

Do you believe in reincarnation?
No, but I don't believe that death is the end of everything. Something must certainly exist afterwards.

Are you a believer?
I think that one cannot live without the thought that God exists. I don't practice, but religion fascinates me ...

By singing 'The nights of Kim Wilde', Laurent Voulzy echoed the adulation of which you are the object in a lot of French people?
Men in France are very "sweet". I met a really handsome guy the other day at Galeries Lafayette. We turned towards each other ... He approached and asked me for an autograph. I would have preferred that he asked me for my phone number!

Have you ever had an affair with one of your fans?
No ... but I have fans who have become friends.

Are there ever any excesses?
Very rarely. I know that we live in a dangerous society and that we must be vigilant. So I am!

Do you live with someone?
No, I have found a certain balance in my life, but not yet with a man. It is true that I am quite demanding! In my opinion, wanting to stabilize is a false reason for being with a man. What I am looking for is quite different. Besides, I'm not afraid of living alone either. There are people who are much more alone, even if they are married, simply because they are not with the right person!

Who is the ideal guy for you?
A nice guy is the most important. He must have a good heart, be sensitive and have a center of interest in his life. However, I don't care about his physical appearance. I have never been attracted to fashion models. I am rather attracted by unconventional beauties ...

Are you free now?
Yes, I live alone and I am not with anyone in particular.

You are coming out of a breakup, at least that's what we read in the English press. Does it bother you to see your extended privacy in the newspapers?
I tell myself that I am still lucky because I am much less harassed than some other artists. Journalists and photographers don't invade my life too much. When I broke up, I didn't have any songs on the charts. Thank goodness it would have been a nightmare! Other than that, this break-up was a very bad time to pass but it's better now. I am a very philosopher at these times!

Do you feel like you have sacrificed your private life for the benefit of your profession?
My private life is more or less described in one form or another in my songs. I think that saying more about private things, it makes them less beautiful ... And then, it's an area difficult to express in words, that's why I'm always fairly discreet. There is also respect for the people I work with. I don't see why I would talk for hours about my boy-friend who, in any case, has nothing to do with my job or my celebrity. Finally, I find it a bit outrageous to use his personal life for advertising purposes, to sell a record, for example. It's really too low!

Is it difficult to live with Kim Wilde?
I don't know, it's not up to me to answer (laughs)! No, I think it's quite easy because I like to share. I'm not selfish. I share mav ie with a lot of people, especially my family members.

Your family seems very present around you, it is not a little stuffy sometimes?
When I was twenty I felt this pressure, and that's why I left my home to settle alone in London. This is where I lived until recently, then I wanted to return to the house where I grew up, near school where I used to go. But I now have an independence that I did not have when I left it.

Is the warmth of a home important to you?
My house is the place where I take refuge, or I protect myself from the outside world which is sometimes frightening. I like to come back to it after my travels. Find my garden, take care of my flowers, cook and do my walking ... I am also an interior designer in my soul. If I hadn't been a singer, I would surely have been a designer. I am obsessed with colors, the environment, the atmosphere, furniture, books ...

It also seems that you are painting ...
Yes, since the age of fifteen. After the bac, I did an art school and then I started to sing. Success forced me to drop the paint. But sometimes I do it again. I love to paint watercolors and landscapes. My favorite painter is Chagall.

You are also very sporty ...
I love skiing, swimming and doing aerobics once a week. Sport is important to me.

To stay in shape?
That, I have a lot of trouble because I really love to eat anything that makes you fat! (laughs) Especially when I come to France! I am on no diet, because every time I go on a diet I gain pounds! I hardly eat any more red meat, not too much cheese, little wine and I don't smoke.

How do you see your future?
My life has always been full of surprises, so I think it will be a continuation of surprises in the future too. Regarding my career, I hope everything will go well, but I try not to think about it too much. In any case, I know that things can change overnight and I am always ready to live the unexpected .... 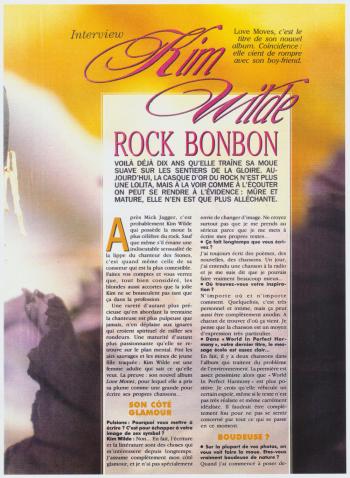 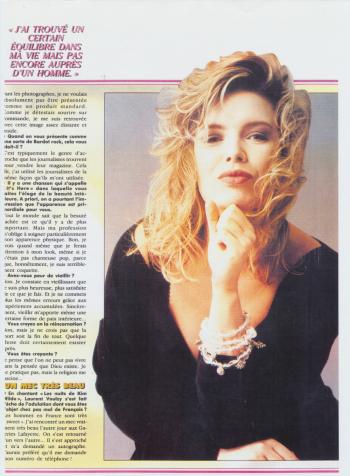 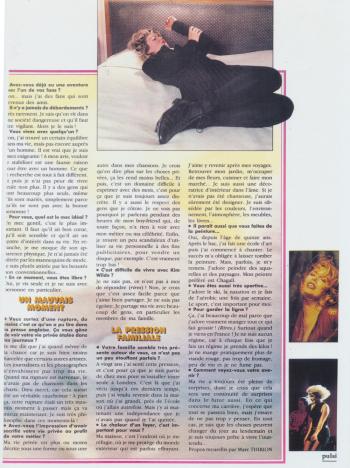