When I was 16... in another of our occasional series, singer Kim Wilde tells Lucy O'Brien some of her teen memories of being both naive and wise

At 16 I remember going on the road with my Dad at weekends, playing clubs up and down the country. My mother wore high heels, tight black lycra pants, black sequin halter neck tops... and we were off! We'd sing Why Must I Be A Teenager In Love and all that stuff. I took it very seriously. I saw it as a start to greater things.

I was doing my O-levels at a girls grammar school called Presdales in Ware, Hertfordshire. I started to feel a lot better about myself, my looks started to get their act together.I couldn't relate to other girls at school. I felt wiser. They were doing so many dumb things. I went around with the hottest-looking girls in the year. They got all the guys, they were ravers, they were popular and they knew it. I managed to just about get in there - it was my sense of humour that got me through. I liked them but I was jealous of them too. I wanted to be like them.

I remember vividly the dances girls would do. We'd have lunchtime discos at our school, and we'd wander in, all girls... It was a bit weird when I think about it - a long line of us all doing dances to Mud and Slade, where you kick your leg, put your hands on hips, step back, move round. It was very butch. There was a social pecking order, whether you were instigating the dance or someone was in your dance.

Platform shoes were the bane of my life. When I put them on I was wobbling up in the heavens feeling a right prat. I also had size 7 feet, which didn't help.

I had my hair cut like Linda McCartney, short and tufty on top, long at the back. Kohl pencil transformed me from an ugly duckling into a siren. I was a complete country bumpkin disaster until then, I made no impression on the local boys. Then I got my first boyfriend and life changed dramatically. He was a good influence on me - he liked the real me.

I was a very private person, and especially with my first boyfriend I wanted my privacy desperately. I was envious of my brother Ricky because he was on the road all the time with Dad. I thought 'You lucky sod, you're free'. There was me living in the middle of the countryside with no car, no freedom.

Home life was good but haphazard and irregular. Meals were at no particular time. Dad was doing lots of gigs, Ricky had left school and Mum was trying for a baby. She lost a few before Roxanne was born three years later, so she had a terrible time.

I remember sitting in my bedroom with my best friend Clare playing records, discussing what kind of men we were going to marry. My wedding was going to be on a beach. The prerequisite for marrying anyone was they had to be faithful, unless they had a bloody good excuse.

I was interested in art. My art teacher taught us to look predominantly at art history. She consolidated my interest in painting, and from there I went to art college. I hated science. All those things that smelled horrible and made you feel ill. The science teacher reminded me of an SS officer. He had slicked-back hair and glasses perched on the end of his nose. He was abrupt and scary.

I was also interested in politics. I wanted to know about social injustices of the world, but I was given essays on procedure at the House of Lords.

The head must have come from Grantham, she was just like Mrs Thatcher. She was huge and busty with immaculate hair, and tweed skirts. I didn't notice a sense of humour.

Music was always there, of course. Discos were top priority and I was big into records. It was 1976, so I was into Elton John, Jackson Brown, Joni Mitchell, Joan Baez and lots of Dad's record collection - Dusty in Memphis, Aretha Franklin. I loved rock 'n' roll. I was brought up on it, so I'm very loyal to it.

By the time I was playing the piano, I knew I wanted to get into music in a commercial sense. I was writing a lot of words and rhymes on scraps of paper. I love rhyme, its confines can be very inspiring. Pop music gives me a three-and-a-half minute structure, a history I can embellish with my own interpretation.

Although at 16 I was naive, I also felt wise because I knew, I just knew, that one day it would be better, and I'd get there. I just had to bide my time. 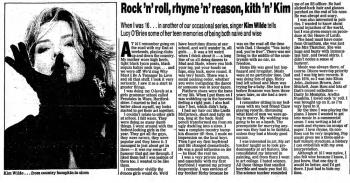