The bimbo who made good

When Kim Wilde flrst hit the charts, with Kids In America' in 1981, Madonna was still on her popcorn dlet, Kylie was just starting high school and the pop world hadn't thought about giving a penny to charity. In that time, Kim has transformed herself from, in her own words, "a talentless bimbo", into a pop star of the first order. On the occasion of the release of her new single 'It's Here', Kim talks frankly to Edwin J Bernard about the past decade and looks forward to the future.

Slnce you last regularly appeared In the charts, pop muslc has changed quite dramatlcally. On the one hand there's the amazlng contlnuing success of the S/A/W sound, headed by Kylie, and on the other, muslc from two underground movements - raves and the Indie scene - have taken over. Are you worrled about it?
No, there's lots of slots for us all. What I really love about music in the charts these days is that it really is very soulful. The stuff I've always written for my own pleasure and listened to has been very soul inspired. It's lovely to hear Soul II Soul, De La Soul, Lisa Stansfield, Adeva, stuff that everyone else likes, and it's quite inspiring in a way. As for Kylie, I'm a real fan of hers ever since she stopped making those dodgy records at the beginning.
Suddenly S/A/W veered her off to a much more soulful level - people might not describe her as having a soulful voice but I think her sound is very Shirelles, very '60s - and now I think she's irresistible. I wouldn't really want to be her, though. I'm happy with what I've got. I'm very happy with my career, the way it's developed.

What difference does writlng your own songs make?
It makes all the difference in the world. It gives you a lot of confidence and satisfadion. A little bit of it is pride, too, because I was written off as such a talentless waste of time in the initial stages of my career. I always remember how that feit - being labelled as Marti's daughter - and that whole thing always stuck with me, deep down.

Did you feel at the beginning that you didn't deserve the success you had?
Yes, there was a part af that. I feit a bit like the icing on the cake. I loved working with Ricky and Marti {Wilde, her elder brother and father, respectively) and I was very proud of their achievements - I still am - but at the time I was only 21 and I was still trying to find out who I was.

Dld you like those early records?
We were all into that kind of music - '70s pop. Personally I was into Joni Mitchell and things like that so my music didn't actually reflect my personal tastes in that area, but my tastes had always been so broad that whatever music we were doing I always responded to. 'Cambodia' was something different. A lot of people who hadn't turned on to me before, turned onto 'Cambodia'.

It's a lot more common now, but at the time you were sold by your vldeos and TV appearances and not by tourlng. Why?
We didn't think we could go out and tour on the strength of one album so we waited for a second LP to come out. I didn't know how to handle being on tour and I did quite a few things I wouldn't do now, like getting absolutely roaring drunk afer the first night and having to be carried to the bus. My voice is a lot stronger now - I smoked at the time which was a disaster and I wasn't very fit.

After 18 months you'd sold more records than your father had in his entire career. Did that success go to your head?
Not really because my family were a very stabilising influence. Any time I started acting like an old tart they'd teil me. I don't remember acting like an old tart too often, although I am only human. I saw what fame and fortune was through my father's success and it didn't seem very glamorous. I think most people whose egos swell - and I don't want to sound sexist but I do think it is predominantly men - get into it for the cars and girls.

Your image In those early days was a little confused. We couldn't tell if you were a post-punk rebel or a blonde bombshell.
My image was either a happy or unhappy accident - depends which way you look at it. I wasn't a professional model so I didn't know how to present myself to the camera all that weil. So there were quite a lot of duff photographs floating around at that time, as well as some really nice ones. It wasn't a very weIl engineered image campaign. I bought second-hand clothes which I now realise weren't that great. But then the Germans called me 'The Bardot Of Rock' and I can think of a lot worse people they could have compared me to!

After winning a BPI award in 1983, your chart success floundered until 'You Keep Me Hangin' On' at the end of 1986. What happened to you?
Of course, the ego was severely bruised and battered about a bit, but I always had faith. I didn't even think about it too much - I was blissfully unaware of my predicament. And during that time I developed as a songwriter and I grew up like anyone else. I went through the usual pain of going out with the wrong guy and breaking up and living alone and liking that and hating that and having success and losing that and having it back again; the uncertainties of life got to me.

Whilst you were away from the charts, Band Aid and Live Ald came on the scene ond the pop world begon to care. Dld you wlsh you'd been part of lt?
I didn't feel too snubbed because I wasn't so successful at the time. I probably wished I'd been successful enough to be involved, though. I know I was proud that the music industry was changing in its attitude and later on, with Ferry Aid, International AIDS Day and Comic Relief I played my part. I had very mixed feelings about Ferry Aid, though. I thought it wasn't in good taste, but at the end of the day I realised that it would raise a lot of money for the families of the vidims. Appearing at Wembley for International AIDS Day in 1987 was brilliant, as was teaming up with Mei Smith on 'Rockini Around The Christmas Tree'.

Now more thon ever, there's a host of female pop stars around. Do you feel a certain affinity tawards them?
Not overly, no. But I do gather a certain amount of satisfaction from seeing famous women who write their own songs because I know how hard it is. I very much like Madonna because she took control of her sexuality and wasn't a vidim. The same goes for Grace Jones, who, when asked about using her sexuality to sell records and possibly undermining the feminist movement and women generally, says that she is displaying a control over her sexuality. I'd say the same thing.

Was that why you shocked us all wlth a very sexy video for 'Say you Really Want Me'?
I'd wanted to do something naughty because I felt that I was getting a bit too wholesome. I wanted to throw people a bit - I certainly did that - but unfortunately the song wasn't a very big hit. I did feel a little bit awkward with it sometimes, but that was really me, I just needed the director to bring it out.

I imagine the highlight of your career so far was supporting Mlchael Jackson on his 1988 European tour.
I turned it down at first but I'm glad I did it because at some shows I brought the house down - I think the Jackson camp were a bit surprised. All these rumours about why Michael asked me were fun. I'd heard he thought I was cute and stuff. I thought he was pretty cute too. I wish I'd had time to get to know him better and find out how cute he really was! I think the only reason I got to meet him was because there was a certain amount of bad press in the UK towards him for having snubbed me. And so his shrewd manager probobly said, 'Come on Michael, all you have to do is meet her for two minutes and have your picture taken'. And that's exactly what happened. I told him to look after himself because he looked like he needed to.

How do you think you've changed over the past decade?
In the past people probably thought of me as a talentless bimbo. I think if I'd seen a picture of me then I'd have thought that. Ooh dear! I think they like me now. When I walk down the street I get these nice people going, 'Hello Kim how are you?' People are very nice to me now, but it's taken until now for people to get used to me. Admittedly, I have changed diredion so many times but it's because musically my tastes are diverse. I never wanted to be a rock, or dance, or whatever artist. It all has a place in my music ond if peopie don't like that then it's just tough. I think there's lots of reasons why I've survived, though, and a bit of it has to do with the people I surround myseif with. And I know it sounds corny, but at the end of the day it's all about a real love of music. 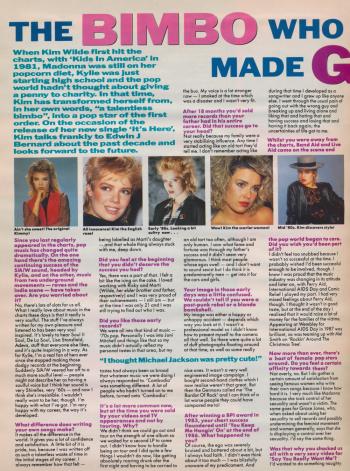 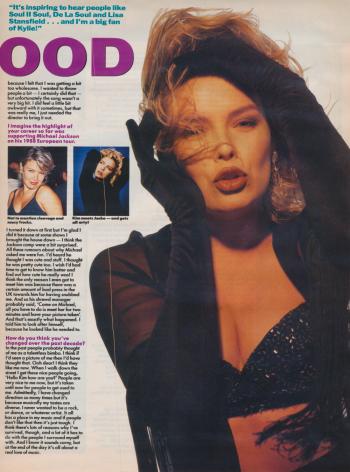