Sexy Kim Wilde knows how to handle herself, but who gets to handle her? Although she wears slinky skirts, she is no soft touch, as ANNA Dirty Mac MARTIN discovers...

The first time you wiggled down the street and got wolf whistled at - what was your reaction?
I can't remember the very first time, but I guess it must have been as a teenager, when I was living in Welwyn Garden City. I've never analysed it too much, but it all just comes down to workmen being bored and not having anything better to do than whistle at the first thing that looks like a woman! And I watch men doing it now, looking at women on the street. I look at the woman, and basically, she could look like anything. That's all men need to get them at it.

Do you get a saucy thrill when you pass building sites?
Sometimes it's a hassle being whistled at. It's very distracting and very dangerous if you're driving. But sometimes it can also be very lovely... It just depends on who does it. I mean, I've been whistled at, and had the 'Oi! Kim!' sort of thing. Yet, at the same time I've walked down the street and had builders come up to me and say, 'Kim, you still look as lovely as you've always done!' And that completely floored me. I was sooo touched. And I thought, I'll never generalise about workmen again.

Ah, but if you worked with a bunch of giggly girlies would you all gang up and ogle at men?
Yeah, probably. I mean, I have been known to derive a great deal of pleasure from eyeing up guys! But it's always been in a much more subtle way than men tend to do it, generally. And I get a great deal of pleasure from looking at women, too. If I see someone who's looking really good or stylish or whatever... I just find peoplewatching very interesting - and I try not to encroach on their privacy too much. So I'm just as guilty really. I've snuck a few looks at the good-looking guy in the car next to me!

Can you remember the first time you were groped?
No, but I do remember one guy who wanted to touch parts of me that had never been touched before. And I was totally appalled, and said, 'Forget it, mate'. Although I really liked him very much and was attracted to him. I was about 14 or 15 and just didn't like the idea of having my person touched to much. He did have a terrible reputation with the girls... And I knew he was only after one thing.

When were you last tampered with?
God, I haven't been groped for a long time! Men don't do that to me anymore. I mean, I've had a few situations over the last couple of years where I've been in a pub with people I know and someone's made an improper suggestion. I just forget about it and pretend it never happened... I've got quite a few friends that have tried to grope me in the past, but they didn't get very far. It's all quite amusing really.

Who would you most like to get into a heavy groping sesh with?
Oh no! Groping is such a horrible word... And anyway, there isn't anyone besides my boyfriend I would consider doing anything along those lines with, of course. I'm a one man woman.

Have you ever been fondled by a complete stranger?
Yeah, I seem to remember having my bum touched somewhere... I stopped to sign autographs and there were a lot of fans standing around. Suddenly, I realised that this guy was seriously trying to touch my bum and stuff. At first I thought it was accidental because the crowd was so close, but when I realised I really freaked out. I went mad and I also felt really disgusted. I'm definitely on my guard a lot more now.

Do you have some serious groping gear?
There are times when I'm alone, and dressed very sexily... And I'm walking down the street dressed very provocatively - I know I am. And cars are going by and it's just mayhem. Obviously, you're very vulnerable in those situations, but it's not your fault. Sometimes, if I'm looking overtly glamorous I do stop and make an effort to tone it down, just to avoid any major hassles.
I have worn some low-ish cut dresses before, and all you ever get is men looking at your tits, which makes me feel very sorry for them. (Who, the men or the tits? - Ed.) But men who attack women just have severe problems.

Can you handle it?
I've got a 10-year-old sister, who is fast becoming a woman. She's a lovely looking girl, and my mind often wanders to the time when she's going to have to handle things like that. But there's no real advice I can give her. It's all learnt from experience, although I'd always advice Roxanne to look deep into her conscience before doing anything.
But personally, I've got used to people looking at me. I know when someone's looking at me even if they're behind me! 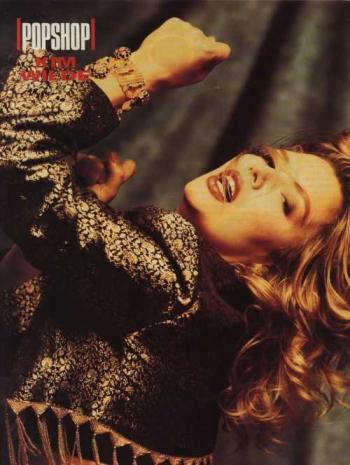