Kim Wilde is rarely at home in her three room apartment in St. John's Wood (North London). She often stays with her boyfriend Calvin Haye, who lives on the third floor of a house directly next to Regents Park, or she is on her farm in Hertfordshire, which is still being renovated, but where she wants to move in this autumn. The 29 year old Kim also spends a lot of time in her "Big M Studios" in Hertfordshire, where father Marty and brother Ricky are working on the mixing desk and where mother Joyce is doing the business side of Kim's career. But when Kim wants to have some peace and quiet, she retires in her home, which consists of a living room, a bedroom and a studio. The room in which she sleeps has blue walls. Her favourite costumes, most of which she bought at Oxfam, are hanging on a silver rod. Next to it stands her bed. In the living room the black piano and the iron fireplace, which she designed herself, dominate the view. All the images, furniture and articles Kim bought in markets or in her favourite neighbourhood Camden Town. Whoever wants to visit her, has to ask for Miss Smith, because the porter only knows her by her real name: Kim Smith. 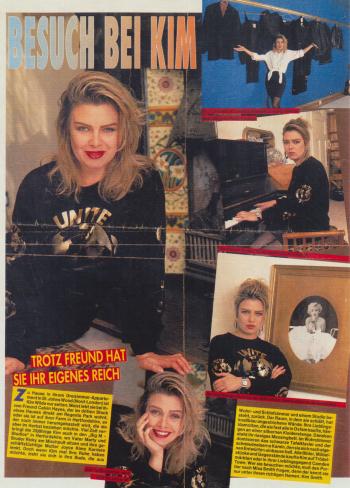