Singer Kim Wilde has her heart in the right place. This week she handed a big bag of money to 13-year old Emmett de Monterey. Emmett suffers from cerebral palsy. For him and all other young people suffering from this serious disease, the Guy's Hospital in London created a special fund, the 'One Small Step Appeal'. The idea was to organise a walk through the capital of England for which everyone participating had to donate to the fund. On July 18 the walk took place and the response was enormous: more than 6000 generous walkers took part, and no less than 300.000 pounds was raised to make difficult brain surgery possible. Kim Wilde who had donated a lot and did the 20 kilometer walk entirely (also combating her superfluous weight) was asked to hand the 300.000 pounds officially to Emmett by the board of directors of the Guy's Hospital. A task the blonde singer did with all the love in the world... A real 'Love blonde'. 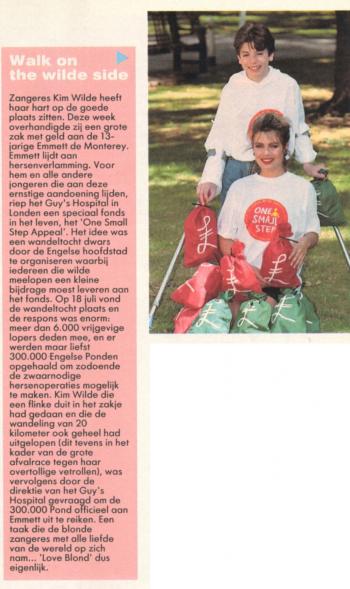