Wilde about the trim new me

The bleached mane has been transformed into a mousey bob and the ample curves are gone. But the changes in Kim Wilde are more than skin deep - she has cast off a personality she had grown to hate.

When her 30th birthday drew near, Kim took a long, hard look at herself. And she didn't like what she saw. Her love life was in tatters and the singer realised she was turning into someone she hardly recognised. "I found myself being a real cow to someone I love very much", she says. "I had got into some bad habits and I realised things had to change". Now slimmer, healthier and more beautiful than ever, she has put her crisis behind her. It's a more mature Kim who arrives for her interview brimming with confidence. "what do you think of the new look", she asks. "Isn't it very sophisticated?"

Her image is a million miles from the Garboesque girl who shut herself away when her relationship with Johnny Hates Jazz star Calvin Hayes ended this summer. In the past she found it painful to talk about that unhappy time but now she can be philosophical about it. "It made me rethink a lot of things, particularly my career", says Kim. "I stood back and realised just how lucky I was to have a job I loved and how much it offered me."

The heartbreak months also taught Kim to weed out what was important in her private life. " Inow live a much simpler existence", she says. "Things I used to think were a problem no longer are. I used to push aside all the positive things and concentrate on the negatives. Now it's the other way round."

Kim is aware that her fans might think her next single, I Can't Say Goodbye, is all about the break-up with Calvin but she dismisses the suggestion. "I wrote it two years ago and it's more to do with what was going on in my life then, than what is happening now", she says. Apart from her busy recording career, there is plenty going on in Kim's life. She has been helping the police get their Christmas drink-drive message acoross and has just finished renovating a 400-year-old barn in Hertfordshire. "I am totally obsessed with interior design", she says. "I love the use of colours and design."

Kim's obsession with style also emerges in her fashion sense. "I am a clothes freak", she says. "I love clothes which are comfortable yet sexy. And I know immediately if they will work for me. I adore Chanel but I often pop into Miss Selfridge too - that is what it's all about, mixing things for the sort of look you want. But I'm not in the league of buying £3,000 Chanel suits - I'd much rather landscape my garden. I do like Joseph and shops like that but in the old days I would often find a great buy in a charity store."

Bathed in body-hugging blue velvet and gold lame she arches her back and shows off for the camera - the silhouette is perfect. Kim's next ensemble is made up of clingy leggings with a jewelled jacket and black bra. "I get very excited by fashion", se says, expertly picking out the final selection of clothes that she knows will work best for her. "After ten years you should know how to do that", she says. Kim is a great fan of Sixties' style and admits to stealing lots of jackets from her father. "He has kept all those wonderful clothes", she says, as she selects a daring see-through black blouse. Then, pulling on a pair of black jodhpurs, Kim announces that they will be ideal for the look she hopes to achieve.

She is right. The final effect puts paid to speculation that Kim Wilde has eaten her way out of her problems. Although it is no secret that Kim has struggled in the past to keep her weight down, she now has it under control. "It used to worry me that photographers would snap unflattering shots of me", she says. "But not any more. It is important to look good but I don't diet like mad or run a million miles a week to achieve that. I do try to eat sensibly and swim when I can. That keeps me in shape. Also, I no longer eat so much red meat and I avoid too much cheese to keep my fat intake down. I suppose I have learned to watch for the danger signals."

The singer concedes that turning 30 might have had something to do with her rethink on all fronts. "I decided that it was time I started getting out and doing things. I didn't dread leaving my twenties behind - in fact, I really looked forward to entering a new decade."

And is there someone special to shar Kim's new life? Could her joie de vivre be the sign of a new romance? "You can just say that I am young, free and single and having a great time. A lot of that is due to the fact that I realised life isn't forever."

Finding Mr Right, she insists, is not a priority. "It would be nice if it happened but I am enjoying life as it is. Put it this way, I am expecting the unexpected." 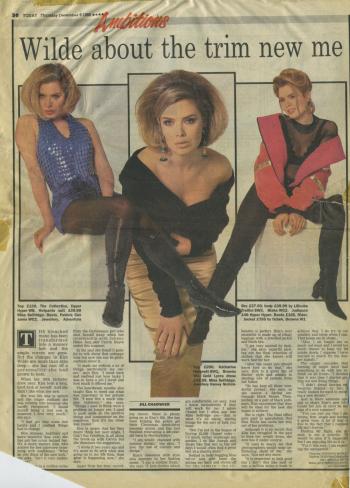