After 10 years at the top Kim Wilde is still looking for Mr Right, and rather likes living in a tent.

Forget the sexy superstar image of Kim Wilde. The blonde beauty dubbed the Bardot of Pop is really still a daddy's girl at heart! Instead of living it up in the world's plushest hotels, Kim prefers her TENT in the back garden. Her mum Joyce says: "She reckons that's much more fun. She takes her sleeping bag and a fryingpan to cook meals and has a great time - even when the rain's pelting down."
Despite making more in a year than most of us earn in a lifetime, Kim is very careful with her money. "She's not mean, just sensible," says Joyce. "She's the kind of girl who will go out of her way to buy a cabbage over the road that's a penny cheaper.
"I've often tried to persuade her to buy the pretty clothes that catch her eye when we go round the shops. But she won't even let me treat her.
"Next thing you know she's come home with a complete wardrobe from Oxfam for about a fiver! The only time I've seen her in a really pretty dress was her 21st birthday party."
Kim, now 29, celebrates ten years in showbiz this year with a new grown-up image. Gone is the spiky, peroxide hair and heavy make-up as she opts for a darker blonde maine and a more natural look.
Her solo career took off in 1981 with the release ofher fust hit Kids in America, co-written and produced by her brother, Ricky, and her dad, Marty Wilde, the rock 'n' roll heart-throb of the 50s and BOs. And she remains very close to her father.
"There are a lot of qualities in him I would admire in anyone," she says. "Ris sense of humour, his intelligence. But don't think I go round looking for someone just like him.
"I haven't met the ideal man. So far there has always been something wrong. ff I met him I'd grab him and never let him go. But I'm in no hurry to settIe down. There's no pressure. I've grown up a bit in my attitude to men. When I was young I looked on them as heroes on white chargers, as something completely divine, to be worshipped. Then I discovered they were just human beings after all.
"To tell the truth I've never had much of a good time with any one man all the time. Perhaps it's that I've always been involved with men for all the wrong reasons, which is very selfish of me. I'm very happy with someone quite special just at the moment, but we're not living together. I've never lived with a man, nor do I have any desire to do so."
Three years ago in Phoenix, Arizona, Kim received her first proposal of marriage. A young man called John popped the question after meeting her at a gig and she says: "He was so cute and handsome and lovely and there he was in the middle of the desert giving me my first ever marriage proposal.
"I really did think about it. I thought 'why not?' But then he told me he didn't like Prince, I couldn't trust a man who didn't like Prince!
"Perhaps one day the right man will sweep me off my feet and I'll get married. But that won't be until after I'm 30 and then maybe I'll settIe for a happy family lire with children ...just like my own wonderful family".

Kim lives in a flat overlooking Hampstead Heath and reeently bought a £200,000 16th-century barn at Welwyn in Hertfordshire, not far from the family home. And her mother always keeps her room ready for her. A happy family life has always been important to Kim. No more so than when she was just eight years old and nearly died from meningitis.
Marty says: "We knew if the disease didn't kill her she'd probably be left with permanent brain damage. It was the most terrible moment of our lives. Hut when I got to the hospital Kim was standing up laughing and joking!"
Doctors explained that her life had been saved by a matter of minutes. They had given her a lumbar puncture just in time and taken off the deadly fluid before it reached her brain.
Kim was already a keen singer at the age of 11, so Marty and Joyce, who's also a singer, let her do a number in the middle of their act at a swanky hotel and she stole the show.
When Kim was 14 she saved her dad from the amorous advances of an eager fan. Joyce recalls: "The girl entered the dressing room after a show. She grabbed Marty and started making advances to him, making it obvious she fancied a lot more than his autograph. And all in front of his daughter.
"Suddenly Kim went up behihd the girl and gave her a mighty kick up the backside. 'Ooops! I'm awfully sorry,' she said in answer to the howl of protest. 'My foot must have slipped!'"
It was the last they saw of that fan. But these days the Wilde child has her serious side. "I get upset about things, like all the seals dying and what we do with the world. It just freaks me out - it's always freaked me out. I'm a bit despondent about the world. I haven't got a very high regard for the way humans treat it. It takes something like the seals for people to start doing something about pollution.
"Greenpeace have been going on about it for years but everyone thinks they are nuts. It took Chernobyl before people realised that nuclear power isn't such a honky idea."
Two years ago Kim delighted fans all over Europe when Michael Jackson picked her to support him on tour. Kim says: "That was a great career move. It could so easily have been a disaster. Yet the response was terrific and it opened up a whole new audience for me." But even though she and Michael were playing on the same stage it was six weeks before she met the eccentric superstar - and then it was for just 20 minutes!
Says Kim: "Some people have said I wasted the opportunity, that if I had played my cards right I could be over in Los Angeles recording with him. But it wasn't like that. And it wasn't my intention. We never even got to know each other properly. Why should we? It often happens that artists tour together without their paths crossing.
"I honestly feel happier now than I've ever felt in my whole life. I even like getting older. Growing older is really a lovely thing to happen to anyone. I can't wait to be 50!"

A diet of junk food snatched in a dozen different countries took its toll on Kim's health. Her weight was up, her skin was ghastly... and, she says, her hair began to fall out. Overwork and stress was turning the vivacious blonde into a wreck. But after a long session with her doctor Kim planned her own fat-free diet, stopped smoking and worked out a strict exercise programme.
"Feeling healthy has given me confidence again. I am no longer demoralised. I'm organised. And I feel great," she says.

A hit with Kim

Here are some of Kim's favourite things in life:
SKllNG: My favourite holiday - and the one thing in winter worth looking forward to. I went to Austria with 18 friends and had the best time of my life.
JAPANESE FOOD: Wherever I am in the world I seek out the best local Japanese restaurant. I could live on Sushi. I'm fond of Chinese food as well.
MY VIDEO CAMERA: My best toy. I take it on theroad with me and film everything that happens.
CHRISTOPHER LAMBERT: What a hunk! I've never met him, but I'm living in hope. 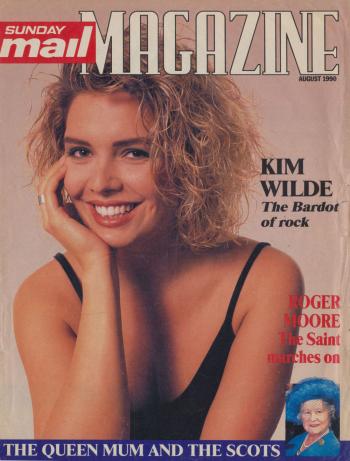 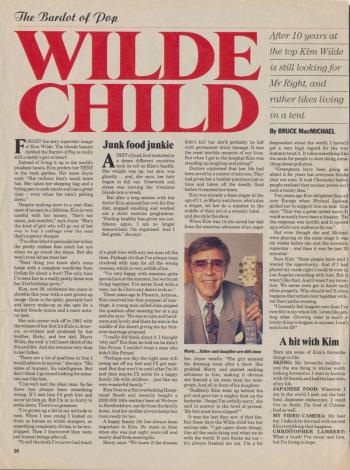 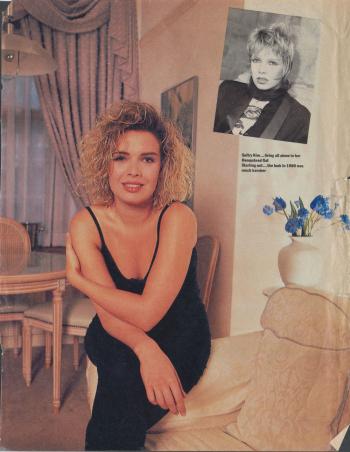