Eleven years of business since her first hit 'Kids in America', a slump marked by a temporary return to brown (hair), the blonde sex bomb Kim Wilde says during his latest album - 'Love is' - the power of reason and heart impulses.

Red lips, eyebrows makeup, any old T-shirt, without laughter economy: Kim Wilde is natural, pretty explicitly. Egocentric ways without stars in the short week. At almost 32 years (November 18), between the coffee cream and cheese tasting that recall her love of France, Kim adults is, write it, more comely than her record. The 'Love is' little event, which will be left - for its ballads - the benefit of the doubt. An observation: the profusion of the word 'love', sprinkled in each piece as a pat on the imaginary world of her many fans still.

On your new album there is a song called 'Heart over mind'. Is this a good definition of the current Kim Wilde?
Not at the moment (laughs), but it has been in the past. It is one of the worst things that ever happened to me ... For now, I use my head a lot, this is what life has taught me.

There are eleven songs on your disk and it is one of love songs ...
Almost ... love is an important part of my life even though it has almost ruined (laughs). But I write about different topics: love corresponds to the expectations of my fans that the tour in the first part of Michael Jackson taught me to know: I have almost every generation of age. Even if I get the classic fansdu same kind of letters that I was writing a 14-year-old Gary Glitter. I recognize the passion that I put.

Gary Glittter not be interested female mail. Who else in terms of your objects of desire gone?
I think though Gary is interested in women, but ... (laughs) I also loved Elton John, Stephen Stills (ex-Mr. Veronicas) and Roy Wood. On the female side, I like Joni Mitchell Carole King, Aretha Franklin and Dusty Springfield. A 9 or 10 years old, my parents moved to the country and this is where I discovered the huge record collection of my father and his huge hi-fi which was a Howler kind of temple. There was a house a fantastic amount of music.

You also started singing with your dad (Marty Wilde, British rocker variety, had his fifteen minutes of GLOI in 50 years with a touch faded love hymns., He worked with his son Ricky on the first songs of Kim)
Yes, my mother Joyce (ex-member of the Vernons Girls) and I, when I was 16, did the chorus on stage. Very simple stuff like doo-wop doo-wop.

The music is decidedly a family tradition since your mother takes care of your business, your brother composes and produces your songs!
My mother takes care of my business and money that I possess a reasonable amount. Not me. As for my brother, I do not accept everything. I refused, for example, he offered me two songs for the B-side of the next singles. He could do better. He was not exactly thrilled, but he can accept it. Together we have our own publishing company, Rickim. Roxanne also my younger sister 13 years, came to sing on the album, she goes to school, she loves horses, she does not seem to fantasize about becoming a pop star. However, my little brother, Marty, 11 years, is really into rap. He seems to have the talent to succeed Ricky in everything he does. He is very good at sports, very good with computers, studio, its capabilities would pay. It's funny because it could have the same relationship with Roxanne I have with Ricky, it's very exciting.

And your father?
He writes and produces musicals, it's going very well. It is no longer involved in music for me but he's still very close. At first, when I was 21 years old when I wasn't writing my own songs, I had the feeling of being an impostor performing things that I had not created. Immediately, my father encouraged me to compose myself, what he had done himself, as soon as his pop-star fame had evaporated in the early Sixties with the advent of the Beatles and pop music ... But this is not a situation that my family and I analyze ... as he did, that's all. That said, I live in my own house, I garden, laundry and take care of my own cats. It is true that there are two or three years, I returned four months living with my parents. My current house not being ready, I went home in the countryside - near Knebworth - spend four months of the happiest of my life.

In this era, you declare a British magazine: 'I never wanted this obvious sexuality attached to blondes, so I let the album 'Love moves' coincide with a manifesto against blondes ...'
There came a time when I felt really miserable, so I asked myself the question: why? Maybe because I had created a monster. If I kill him, everything was back to normal. So I took my natural color, brown, and my life was always shit. So it was not the hair ... it was something deeper. This happened just after the tour with Michael Jackson and I had the feeling of becoming a caricature of what I was. I realized that the demons were not going away by changing my hair colour. And then, scrutinizing my private life, I discovered that my alter ego was no longer my enemy I could trust me control my character outside, the blonde who exhibited on stage. And it was important because previously, I felt that this blonde controlled me, now it is again balanced choices.

Your father seems to have been rather hard, you reproaching you let go, gain weight, no longer be competitive ...
Now, I realize that my return to natural color, gain weight, how etaits me strictly on success. I drank a little wine, but without being alcoholic letting me go. After the tour with Jackson - thirty dates in three months - I freaked out because of the atmosphere stressed, hyper-protective, wondering what this rhymed glory which allows even more quietly go for a drink. It was not the life I wanted.

Your first 45-laps 'Kids in America' has been a worldwide hit, you should have been able to be a place of Madonna today ...
I probably have more ambitions than the average person but it is barely a fraction of what Madonna possesses: it seems totally saturated with ambition. Not me ...

How did you get to sing a duet 'Mes nuits sans Kim Wilde' with Laurent Voulzy?
I was in Paris and someone came to me about this, I was not very hot but I asked them to send me the song in England,, thinking 'no way'. In the studio, I listened and found it great, it sounded like a disc ... Kim Wilde Ricky has also found very good. Laurent has come among us, it is a bit like a child, he has this innocence and enthusiasm. He is very affectionate and I love his sense of melody.

Rest your favorite?
Lentil soup ... I do that myself.

Your favorite clothes?
For the moment, I love my jacket, color (a nice tone purple), I love leisure clothing...

Your favorite phrase?
(Thinks) You do not need to be different to be good, being good is different enough ... 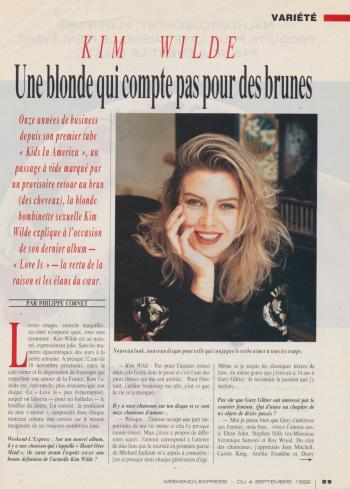 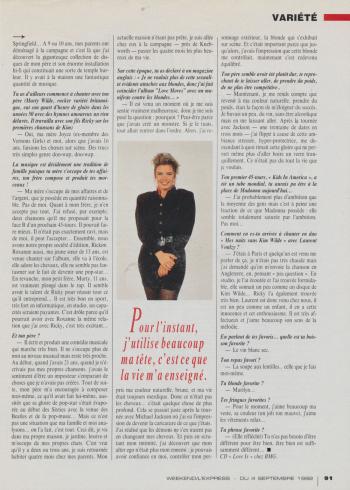