It's raining outside, but what does that matter when you're inside with Kim Wilde? She has a cold and talks about baking bread and keeping sheep. Because she is full of it: life in the countryside. Just before the recording of her new album, Love is, she exchanged the big city (London) for a refurbished barn in rustic Hertfordshire. There she regained the peace in her existence: ,,It is a good and simple life. I enjoy many things that I in London couldn't do. I really have found a home, something beautiful. And I am very happy there. Finally."

The former barn is near the studio, which the Wilde family had built about eight years ago in Knebworth and where 'Love is' was now also recorded again. A rural environment, not really an ambiance to worry about your career as an artist. And certainly not when your career has taken you over high peaks and deep valleys for a whole decade.

Candid: ,,The idea of ​​throwing myself back into music was a a little scary, I have to admit, I was even a little scared of it. I wondered if there would still be room for me. The competition is much greater than it was a few years ago. It looks now good looking, the response to the single is pretty decent, but i got the known a lot of question marks lately.”

Long skirt, boots, hair up. Even as she sits there, in all the everyday simplicity, she is nothing less than a monument from the early eighties, when with a crossover of pop and new wave scored a string of world hits: "Kids in America", 'Chequered love', 'Cambodia', "View from a bridge". She would never match that stormy success from those early years. »My album Close was still quite successful, with three hits in the English language top 10, but in the meantime I have gotten used to the peaks and decline in my career. And the public too, I think. I take it as it comes these days, I don't analyze the past Lake. I also have no penchant for the past, no matter how successful. In addition, I try to be successful in other ways in my life. Now I write my own work, sometimes with people I used to only dream of: Rick Nowels, the man behind Berlinda Carlisle, and Tony Swain, well-known British producer. If I have success with that, it's honestly worth more to me than a hit from 1981."

In addition to Nowels and Swain, Kim worked together for Love is again with her father Marty, herself a music star in early 1960s England, and brother Ricky. Her close family relationship is still becoming quite unique in today's pop world. ,,I feel we have a team, we work well together. I'm not blind to it, we after all, we also work together with others, it is often a starting point for what I do. If I start something, I will immediately take my family there involve. I hope it stays that way; it is in fact like being in a strap is. At least it wouldn't be the same without them.” Her parents also managed to persuade her in 1988 to go on a world tour with Michael Jackson as a supporting act. In person When she was given that opportunity, she had reservations about this: ,,Everyone would have had the same doubt: opening for a world class artist, I had just released Close, the album had a slow start, and the single - 'Hey mr Heartache' - didn't really a lot. So when the question came if we wanted the support act do, was my first reaction: Forget it. But my father and mother, and the record company, eventually sold me got. I did have some buhne experience, but the idea of ​​doing one tour performing in front of about two million people was simply terrifying. In retrospect, I'm glad I did it, I learned a lot from it." She met the shy Jackson himself only once during the tour, for a publicity photo. "Gived a hand, said hello and took a picture. That was it."

Kim, the sobriety itself, couldn't place Jackson's curious airs: "I couldn't relate to him at all, so it didn't bother me that we weren't buddies. I never kicked famous friends. The friends who I have, also mainly date back to my school days. Fame doesn't impress me at all." 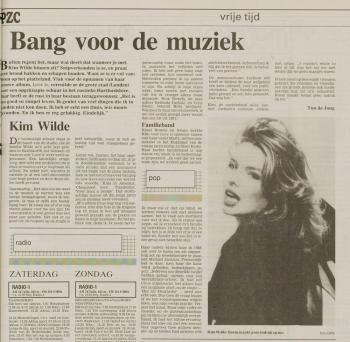