This quote is nevertheless from Great Britain's most successful female singing voice of all times - neither Sandy Shaw nor Dusty Springfield have had so many hit singles as Kim Wilde by now. With "Love is" she presents her eighth album; the promotion tour for it has sent Kim Wilde to Vienna for a day, where she patiently gave answers in her Plaza-Suite. She made more of an impression on the writer of this article with her positive radiance and her natural charisma than with all of her records together...

The start of your career happened in 1981, when your father Marty and your brother Ricky wrote "Kids in America". What does Kim see as the secret of her success through all these years?
I believe it's that I have my own style with a good team around me - one, that functions without problems for 11 years. I can't imagine that I would have functioned in this business with anyone other than my brother Ricki - I haven't met anyone in the course of these years, who harmonises better with me than he does. I like to surround myself with goodhearted people and feelings - what good is the best artist, when he's a pain in the ass? Ricki knows me very well of course and can handle me rightly that way. Whereas I'm the very emotional, euphoric type, he's more sober, and keeps my feet on the ground and dots the i's and crosses the t's where needed - this way we have a great teamwork. My mother takes care of the business side; contracts etc. It's very nice to have someone you can really trust in this area. And my father is not just an experienced songwriter (he had many hits in the late fifties and early sixties with "Endless Sleep", "Donna", etc.) but also a good support for me.

One of the absolute highlights of Kim's career was of course the 'Bad' world-tour in 1988 with 35 shows in 5 months, in which she supported Michael Jackson; in the slipstream of this tour her sixth album "Close" sold 1,5 million times - with five top 40 hits; three of which ended up in the top ten!
It was an unheard of experience for me - unbelievable in every way. It was unbelievably successful for me. I have learned more professionally than in all the years before that and I have gained a lot of confidence both professionally and privately.

With Michael Jackson Kim has had no more contact:
I believe I have broken his heart! No; all craziness aside - Michael Jackson is living for his work alone. We have only made a few promotion photos together - but he was very shy and nice. And as a woman I have felt that he didn't feel unwell in my vicinity...

What does Kim especially like in a man? She doesn't want to commit:
When I moved to London, I saw a house near to my record company's office and I thought immediately: I want to have that! It went the same way when I saw my current home a few years ago - the chickens were running around, and there was this old well - and an inner voice immediately said: this is it! And so I bought the house. It's the same with men!

You buy them...?
(Kim laughs loudly) Ha, ha, not that; but it's this instinctive reaction. And thank God it doesn't happen too often, because it sets you up for all kinds of problems.

No attractive woman escapes from the relations questions, why should the issue be different for Kim? Whether she can imagine having a functioning relationship apart from her career?
Many friends of mine say it is possible, many think it's impossible. I can't say, probably because I've never had to deal with the issue. I won't give up on music for anything in the world - although I can imagine having a family with children.

It's almost unbelievable that she hasn't found the right father yet:
I can probably live with a bad record, but not with a bad relationship! I follow my brain rather than my heart in such questions. But who knows - everything might change tomorrow - getting to know someone is instinctual for me - and I'm always very naive until the opposite has been proven!

Kim knows very well that she is a very attractive person, how important is it for being successful as a singer?
At the end of the eighties it was certainly not a disadvantage to have goodlooking assets - today it doesn't attract anyone anymore. But what is beauty anyway - the ideal of beauty always changing, like in politics - what's beautiful today can be ugly tomorrow - maybe I am the most ugly person in the business tomorrow! I don't hope that of course. But in the nineties beautiful teeth are not enough; it's more about quality again.

Whether she has a fear of growing older?
I am now 31 years old - I feel very well. I don't have any fear of the future, because I am a very optimistic person; but maybe I am also too naive - or somehow crazy! But I have walked around with a lot of fears when I was younger - and nothing happened, which I could have known. Being a prisoner of your own drama is just a waste of time!

For the musicjournal we had to mention Kim's rolemodels:
I am certainly shapes by the music of the sixties: early Beatles albums, Sandy Shaw, Gene Pitney, Kinks and of course the albums of my father: there was so much that I liked - later there were the Sweet, Gary Glitter, Slade, Bay City Rollers; for my musical development bands like Sparks, early Queen, Roxy Music and later Brian Ferry and also Gary Glitter were important. But I only have one rolemodel: Todd Rundgren - he is my all time hero! I love his songs!

Kim has no bodyguards. It was understood as a job application when I asked about it. But what male wouldn't want to take care of her bodily needs? Can a woman like Kim Wilde go out wherever she wants and with whomever she wants?
I love life and won't let myself be confined. My level of fame leaves me enough space, thank God, to enjoy life - I don't want to end up like Madonna or Michael Jackson - who are almost forced to avoid life out in the open! I am happy not to be a megastar. I can go out wherever and with whomever I want - when I have enough time and when I have the feeling that it's not more expenditure than fun! 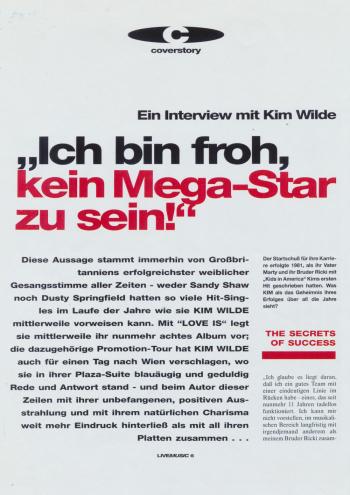 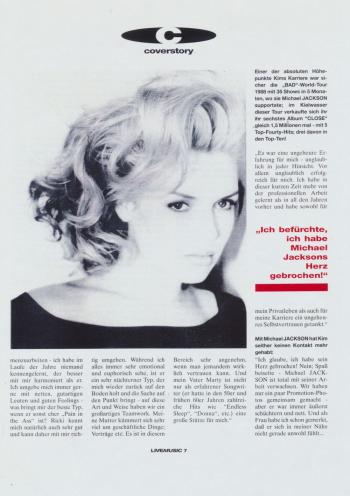 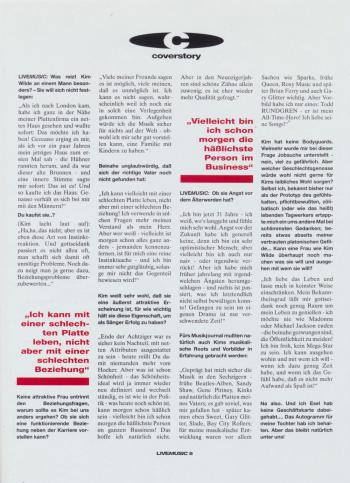