Because of a heartache

Kim Wilde has already been awarded a hundred golden discs. We all remember her debut in 1980 with 'Kids in America'. Yet in recent years, we heard little about the blonde singer. Her fans knew her from the tour of Michael Jackson in 1988, with 34 european concerts. She sang in the first part of the concert of the star. And then, nothing more ...

"My previous album ('Love Moves') did not sell very well. And I had a nervous breakdown after a heartbreaking affair" (She was partnered with Calvin Hayes from Johnny Hates Jazz), she confesses, "All this made me reflect on my future. At one point I even contemplated abandoning my  career. Fortunately, she didn't do this. Kim Wilde returned to form with 'Love is', promising a hit album in Europe and Japan. "I am preparing a global tour which will commence in December and will extend over the entire year 1993, and certainly it will stop by in France too."

It is therefore a Kim Wilde transformed who appears with Michel Drucker on the stage of "Stars 90". But who is behind this resurrection? A man?
"Oh no, I am still single. I would like to have children at some point, but first I would need to find the father. For now, I am quite happy as I am. I prefer to be alone."

"My turning point came as I moved from London back to the countryside. It invigorated me, it's there that I realized how bad the capital was for me. The city is too stressful. I felt alone. Here I have my family, my friends ... They helped me turn the corner .

"Love is" is the eighth album of Kim, who wrote most of the lyrics herself. She also employs her sister Roxanne (12 years old) for backing vocals on one track. 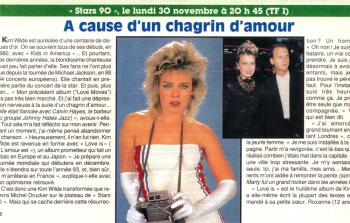