1992 will certainly be for Kim Wilde the year of her comeback. Indeed, since 1988 there has been little talk of her, and now four years after the worldwide success of her album "Close" she reappears more sensual than ever!

Hello Kim, what has happened in your life during these four years?
I started a big turning point when I left London to settle in the countryside, in Knebworth, in the north of England. Leaving invigorated me, it was only there that I realized how 'bad' I was in London ... It allowed me to take a step back ... and start a new life ...

You live alone?
Single yes! Alone no! I live near all my family.

Do you still work in London?
No, since we have set up a recording studio on the scene that is efficient enough to be able to design our songs. And my brother, who produces me also lives with us, so musically everything happens on the spot.

Registration too?
Most of it is. For 'Love is', we started working in December 1990. For eight months we recorded at home, then we went to Los Angeles for three months and we did the finishing work there in several studios.

From your brand new album 'Love is' ... Can you tell us about it?
It is always difficult to speak, to summarize in a few words almost a year of work ... What I can tell you is that it is much more "mature" than the previous ones, and that it is a reflection of all the emotions and analyzes that I have been able to gather in recent years. "Who do you think you are" is a reflection on the star system and the transformations that one can undergo because of success. "Too late" is a song that talks about life: its ups and downs, its joys and sorrows ... The album, as a whole, is still very positive (laughs) ... even both ballads that I have just detailed for you.

I take your word for it! Not only because I listened to the whole album but because I also noticed that you have a "fishing" quite rare in an interview, and I would even say that it is communicative!

Do you have tour plans alone this time?
The "Bad world tour" in 1988 with Michael Jackson was for me a great experience, a very beautiful tour. But I want to go alone next time.

See you on stage! Thank you Kim for this interview. The album that Kim Wilde has just released, titled "Love is", is his eighth album. She signed most of the texts and it was really worth the wait. In all sincerity, this is a very mature album. 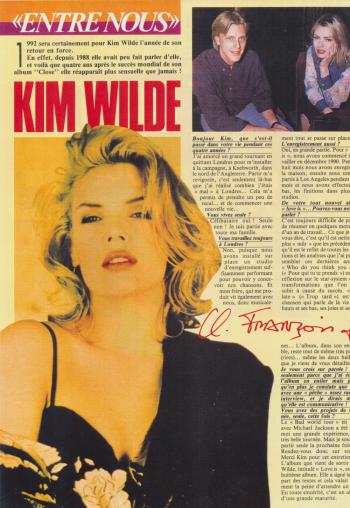