For Kim Wilde it wasn't obvious that she wanted a career in pop music. After highschool she chose art college, for instance. She once sat at the employment office to search for a job. Before her world hit 'Kids in America' Kim Wilde was just a 'Kid in England'. A talk about side jobs, holiday jobs and job interviews...

Before we speak with Kim about that first this: it's going very well with Kim. She's living at 'home' again, on the countryside, some 40 minutes away from London. Close to her own studio. There she also made the 'Love is' cd. 'I am very happy with that. And the outlook is very good. I am really excited. It's just like starting all over.' That's right. The single, 'Love Is Holy', scored like in the old days, the next single 'Who Do You Think You Are' is also promising and Kim looks better than ever.

Have you ever wanted to be something else than a singer, a nurse for instance?
Not a nurse, but I have worked in a hospital. In school I was always very interested in art. And this year, since I moved out of London, I have been involved in that again. Not with painting or sculpting, but in the area of home decoration. I have found techniques like guilding and painting materials. I go to auctions, to second hand shops, I go to flea markets etc. And that's what I would like to do in future.

Are you a fanatic person?
Well, let me put it this way: I am obsessed by details. An illustrative example: my house is a bit big, but I have only one telephone. So every time I was on one side of the house and the phone rang, I had to run all the way to get to the phone. The only reason I don't have more phones, is because I didn't like the way the ones I saw looked. I don't just want any old phone. It has to be an old one, and they are way too expensive. So it's just one phone. That's the kind of person I am.

Did you have a job as a teenager?
Yes, I have had a few part-time jobs.

What was your first job and what did you buy from the first money you earned?
The first job I ever had, was cleaning the stairs at my piano teacher's house. You can not imagine how filthy those stairs were. She had dogs, you know. The whole house smelled of them (turns up her nose). From the money I earned I bought some jewellery.

A good memory?
In fact yes. She was a very spiritual woman, she believe that the ghosts would take you under their wings, and she could also see them. A little strange. But I have learned how to play the piano because of her and that was something incredible for me. Because it helped me become a songwriter.

At what age did you start with that?
When I was nine, or ten.

Did you ever apply for a job?
Oh yes, in the big summer break I did some cleaning work in a hospital. We have also worked in a children's home, and sold flowers. And babysitting of course. What was the other job I had? Oh yes, in Haarods, the warehouse in London.

What department?
Dresses. I worked there during the summer, together with a friend. I lived at some distance from the town, but fortunately her father worked in London, so we could ride with him.

For how long did you do that?
Oh, only a month, or less, three weeks or so. But it was fantastic. Because I really enjoy selling things. Unfortunately I didn't work on provision, because I sold a lot. I was really good at choosing the best dress for the customer.

Did you ever write a letter to apply for a job?
Er, no never. Because I never had a real job, just part-time jobs. When I left art college, I was living at home with my brother, my mum said to us: 'What would you like to do?'. I replied: 'I would like to do something with music...'. Because at the time I used to make music in the streets. I didn't know exactly. I'd let go of the idea of continuing my study. I had lost faith. I couldn't recognise myself in the idea of art as an institution. So I wanted something with music. But my mother said: 'That may be, but I'm tired of you hanging around here all day, without earning something. You will go to the employment agency now.'. And I said: 'Do I have to?'. And she said 'Yes, because then you will have a right to get an allowance. We pay taxes, so you've earned that right.' So I went there with my brother. Me at one desk, my brother at another one. And he was lying! Unbelievable! The lady would say: 'Would you like to do something in construction, metal, carpentry?' And he said 'Yes, I can do that'. But he has two left hands. And I thought: 'What is he doing?'. Because my brother always got into trouble. Meanwhile, I was really honest. I said I liked music and that I would like to work in a record shop. A few weeks later Rick and I started to make records, and 'Kids in America' came out. The very same week that single entered the charts I got a job offer, to work in a record shop. I had to turn it down, unfortunately. Because I would really have loved to work in a record store. Oh well, maybe one day... 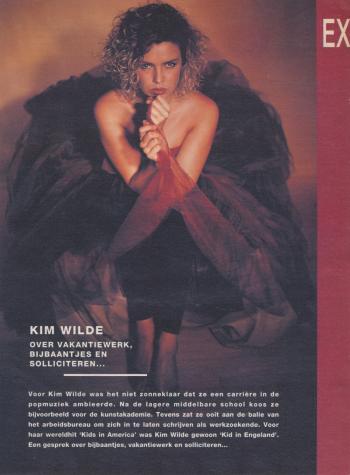 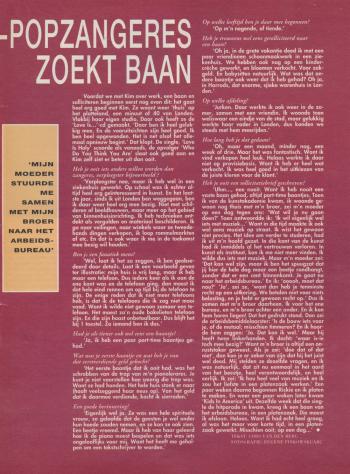