Is Kim going to America?

The single 'Kids in America' was the breakthrough for Kim Wilde. But however famous she became in the rest of the world, in America she never knew lasting success. It doesn't really worry Kim: "A career in America is the ultimate to reach as an artist. But it's not for me, and on top of that my boyfriend doesn't want to go and live in America. He is much to busy with his job as an accountant."

But perhaps Kim's accountant has to come along with her to the States soon. Because her new single 'Love is holy' is on its way to become a hit over there! 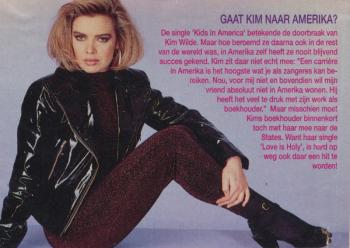