Kim confesses: How I cured my blues

Just a year ago, golden girl of pop Kim Wilde was deeply depressed... but now her star is shining again.

Kim Wilde used to dread waking up. Just a year ago, the beautiful singer who should have had everything to live for, couldn't think of one good reason for gerting out of her bed to face the day ahead.

Kim's career was in limbo, she'd just split up with the man she loved and was in the depths of a terrible depression. "It was like being in a deep, dark hole and not being able to escape," says the sexy blonde singer who the French call the Bardot of pop. She'd also lost her svelte shape, piling on two stones of extra flab, and recalls, "I was working really hard to lose it, but there were so many moments when I thought, 'What is the point? Why bother?' I was in a nightmare I thought would last for the rest of my life."
But what a difference a year has made for 31-year-old Kim. She's bravely fought her way back to mental and physical health, and can now even say that she's glad it all happened.

"It was the making of me," she declares. "A really good thing. I got better all by myself md that has made me so strong. Now I think I could face anything life throws at me and cope with it."

And Kim is back with a vengeance. She has a new album, Love Is, just released and a zest for living she though was lost forever. But the struggle to cure her bJues was long and lonely - and she still finds it hard to talk about.

"The worst thing was that I actually could not think of one good reason why I should feel so bad. I had a lovely home, a loving family, my basic health, my youth - everything was going for me.
"I really had nothing to complain about. I just literally woke up one morning in a black depression. They say tha divorce, death and moving house are top of the list for feeling bad and I always thought that was stupid. But looking back, maybe that was part of it."

For Kim's long love affair with Johnny Hates Jazz star Calvin Hayes had broker up and, after eight years living alone in London, she had decided to move out of town and back to the countryside to bc near her family.

She had bought a converted barn in Hertfordshire close to her dad, 50s idol Marty Wilde, 53, mother Joyce, 52, sister Roxanne, 13, and brothers Marty, 11 and Ricky, 30, who's married.
"I didn't have the courage to move ou there for two years," admits Kim. "When I first moved to London, it had been my way of saying 'I'm independent, I can do it by myself.' I kind of ran away from home when I had enough mone and got famous.

"But it was very lonely sometimes. I had relationships, but I never set up home with anyone. I'd be abroad with my band, having a laugh with people then I'd go home to nobody.

"You can call up your friends, but it's not the same as having people nearby all the time. Finally I had to say to my family, 'I really need you guys. I rea1ly want to be with you. I want to spend my life being close to you.'
"It was hard for me because I was wo ried it might be an admission of failure that people might think, 'Oh, she's running back home. She can't handle it on her own.' And then I decided I didn't care what people thought any more.

"The good part was that I went back ~ on my own terms, to my own house ar ~ my own lifestyle. I lost a lot of face doing it, yet I gained a lot for myself.
"But at the same time I went through the upheaval of moving, suddenly everything came down on top of me. Up until then, I'd been shelving all the problems I should have been dealing with. What's more, I'd split with Calvin and was dwelling on the fact that I'd reached 30 and was alone."
It was all too much for Kim and she cracked up. She says, "I thought of getting medical help but that would ha been an admission there was actually something wrong with me and I didn't want to do that. It scared me.

"All I could think of was 'What's it all for?' There just seemed no point to anything. I couldn't think of a reason for getting out of bed and I was always so tired all the time.

"Yet the one thing I never considered was suicide - however bad it got. In my heart, I could never have done that to my family and friends. I admit I can be selfish sometimes, but not that selfish." Kim did go to her dad for advice... and was stunned when he seemed unsympathetic. "Dad had gone through a similar depression at some point in his life. But when I approached him expecting advice, I was floored when he didn't have any to offer. He knew, though I didn't realise, that it was up to me to work it through for myself.

"He was great really. He wouldn't put up with all my whingeing and moaning. I would go round to try and get a bit of pity from him, but he was really hard. He'd say, 'Stop looking inward, look outward.' I told him I was in trouble and wanted help and to think about myself. He just said that was my problem - and he was right. Gradually I began to understand."

It was during that traumatic time that Kim fell head-over-heels for motor salesman Paul Holmes. She's shy of discussing their romance in public but says, "He was such a good friend to me during that time. But in the end, I found it hard to share my problems with those close to me because it always sounded so pathetic and boring. I didn't turn to drink or drugs, but it was bad enough."

Kim says there was no dramatic turning point that began her road to recovery. She just gradually got better. "1 can't remember when my depression lifted. I was asking my mum about that the other day and neither of us can remember a particular moment when I began to get better. I just realised that one day I actually felt good. And that I'd been feeling good for a while."

She believes getting fit again helped enortnously. Her family had called a summit meeting, sat her down and told her she had to sort herself out - that she was overweight, was letting herself and her career down.

"I was so angry at first," she recalls. "I was like a child being caught out. Until then I had been beyond admitting there was a problem, even though all my clothes were feeling too tight and uncomfortable.

"I sulked and thought, 'I work so hard and all they can do is moan at me.' But, of course, it was exactly the right thing for them to do and it gave me the motivation I needed."

Kim started running two miles a day. "It was hard at first, but now I go running for pleasure. Exercise is vital for a feeling of well-being because it helps to release a lot of bottled-up anxiety. And for getting involved in something that is outside yourself - that stops you looking inward all the time".

She cut out stodgy foods and began eating breakfast for the first time. "I won't go on a diet", she says. "They're bad for you because all you do is think of food all the time."

More therapy came with months of hard labour on the 16th-century barn. "I did all the work and learned painting and decorating techniques. It was great. I lived in jeans and old clothes and it was wonderful. I even considered never making another record again and doing that instead."

In fact, when her record company reminded her it was time for a new album, she leapt at the chance. "My ambition had come back," she says.
Fame has been something Kim has lived with since her father's heyday. And at 20, she was top of the charts herself with her first hit single Kids In America. Eight years later, she was the opening act for Michael Jackson on his European tour.

She says, "Fame doesn't make me or anyone special - but you can let it become more important than it should be. If you're not careful, you can lose something of yourself along the way. I'm only human and am sure I must have fallen into that trap somewhere along the line. I can think of times I was shorttempered, perhaps with someone who didn't ask for it. But my parents brought me up in a way that discouraged me from behaving like that.

"I've still got the same friends I've always had. I haven't suddenly acquired a taste for caviar - although I do like champagne!"

Kim's so down-to-earth she actua1ly delights in taking her anti-star attitude to the limit. Recently she went to visit a girlfriend who does the catering for rock concerts - and ended up serving pork chops to Dire Straits! "They were looking at me serving up and I said, 'Don't worry, guys, next week you've got Annie Lennox!'"

Kim can now laugh a lot, even about her biggest dread - becoming an unemployed pop star. "lf it should happen now, it will be 100 times easier than if it had happened a year ago. Now I have a totally different attitude to life. I was always an optimist, but I forgot about that for a while. Now I've got it back again.

"If someone had depression and turned to me for advice now, I'd tell them what I wanted someone to tell me - that there rea1ly is an end to it.
"It does stop. It doesn't go on forever, but it's up to you to finish it. "I thought I was going to feel like that for the rest of my life. I had lost my zest for living and my faith in myself. But now I'm fine.

"I rea1ly believe things will turn out for the best. I've got back the joy in my life and no matter how fed up I get, I still feel good deep inside."
Says Kim, "Out of adversity has come something really good." 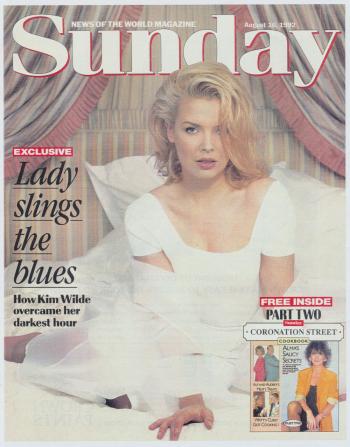 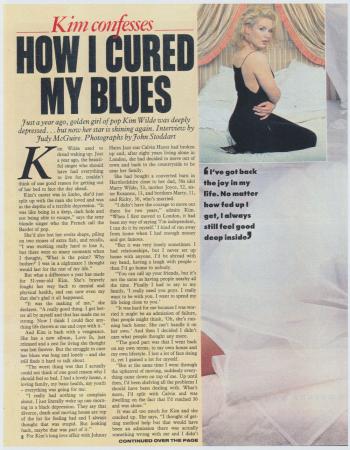 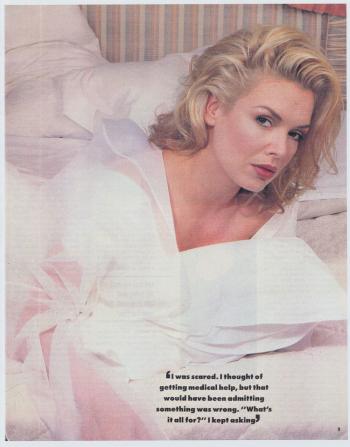 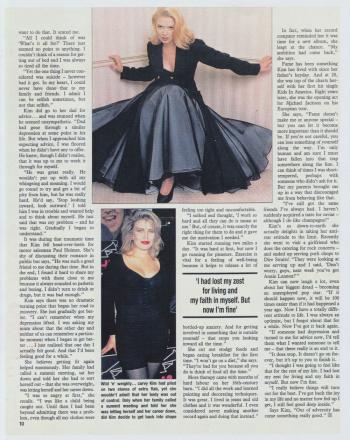