Private: Her real name, Kim Smith. The singer Kim Wilde was born in 18th November 1960 in London – Great Britain. Daughter of Marty Wilde, a success singer of the 50’s, and of Joyce Smith that performed with The Vernon Girls and became Kim Wilde's manager. Her brother Ricky Wilde is musical producer.

Career: After her collaboration as backing vocalist in her father's shows and records, Kim Wilde signed her first record contract in 1980 by the hand of her brother, producer associated to Mickie Most.
Her first single 'Kids In America' saw daylight in March 1981 and immediately climbed to the British top, reaching the second place of sales. Two months later another successful single came out – 'Chequered Love' – and in July of the same year is released the first album, 'Kim Wilde'. This record hits the first place of the British Hit-Parade as well the singles.
In May 1982 a second album came out, entitled 'Select' and in August of the same year, Kim Wilde's Records Company announces that she's sold more than 6 million copies.
In 1983 wins The British Records Industry for the '82 Best Female British Singer'.
Meanwhile, Kim bought an appartment in London and starts to live alone, independent of her family. Relying on with the collaboration of her family she keeps her popularity in shows as well in records.
A new succes by Kim Wilde in 1986 with an old hit of The Supremes – 'You Keep Me Hangin' On'. In 1987 she takes part of a records to rise funds for the ferry-boat Zeebrugge victims and sings at Wembleys Concert for the AIDS Research, singing the Elton Johns song 'Sorry Seems to be the Hardest Word' along with her father and her brother. In the same year she joins the comedian Mel Smith recording under the name of Mel & Kim a version of Brenda Lee's hit 'Rockin’ Around the Christmas Tree'.
During the year of 88, Kim Wilde openned the first part of Michael Jacksons concerts in his European tour.
'Love Is' is her recent album, already released in 1992. 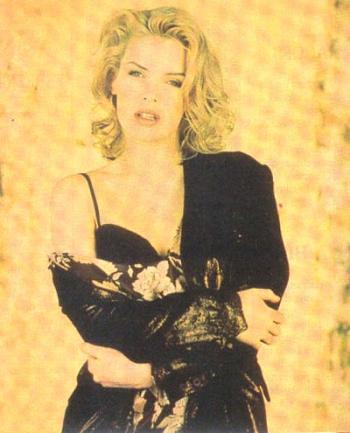