What does a former pop-Lolita, a teenage pin-up with an infectious 'Girl next door'-erotica, do when she's past 30? Resign, have a facelift, pretend or simply become old? None of that! A new image is needed. Kylie Minogue has just done it, Belinda Carlisle has shown before how it's done. Now we go through the same thing with the 32-year-old Kim Wilde (Smith).

The daughter of popstar Marty Wilde, who had a lot of success with cover versions of American chart hits in the late Fifties, was discovered after her art college study by Mickie Most. The pop-maker produced a bestseller for the young girl with 'Kids in America', which became a hymn for the new wave generation. Chartbreakers like 'Chequered love' , 'Water on glass' and 'Cambodia' followed.

At the end of the 80s it became more quiet around Kim Wilde. The hit doledrums also stopped the need for home stories from the tabloid press. Optically refined and grown up musically - "I am a fan of Elton John these days" - the "Lady" comes back on stage. Together with her brother Ricki Wilde she wrote and produced the album "Love is". On November 14 she performed live during the big Model-gala 'Das Gesicht 92'. 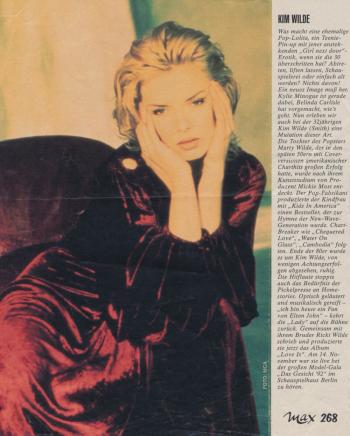