Will it ever be alright with Kim Wilde again? Is the blonde singer with the sensual pouting lips only good for coincidental hits or a complete artist? An overview.

A smash hit. That's the song 'Kids in America' in 1981. A firm new wave song, sung by a young, fragile singer with a voice that seems to suffer from a chronic cold. A sympathetic girl. The name of Kim Wilde is made with a bang. Kim Wilde (18/11/1960) is really called Kim Smith. Her father had a few hits as a rock and roll artist around 1960 and didn't succeed in keeping his success, because he put his family first. In the early eighties he helps his son to start a career in music. Kim is asked to sing backing vocals. From that moment on it is decided that Kim has to be the artist in front. Father Marty writes the lyrics. Brother Ricki composes the music. Their collaboration delivers more hits: Chequered Love, Cambodia, Love Blonde (an ode to all blonde girls). And the beautifully melancholy View from a Bridge. With her family Kim has always had a good understanding. About her parents she says: "They have stimulated me enormously, especially in the music area. My mother put us on piano lessons and I'm still grateful for that. I hated it, but in hindsight it really helped me to develop my own style. My father got us in touch with various styles of music. He put us on a chair and said: "Listen to this, this is great music". Then he played Bridge over Troubled Water by Simon & Garfunkel, or classical music by Chaikovsky. He taught me the love for beautiful things, art as well."
In the beginning Kim Wilde goes to art college in fact.

Next to the compositions of her father and brother Kim tries to write her own work. Not always with a lot of success. In 1986 she scores a number one hit in America with You Keep Me Hangin' On, once a success for Diana Ross & The Supremes. But because she lives in England, she doesn't succeed in breaking through entirely in the States. She is a great success however supporting Michael Jackson. Later I see her on German television with the song Can't Get Enough (Of Your Love). She's nothing like the fragile singer of Kids in America. She has gotten a fuller face, bigger thighs and a nice big behind. The blonde hair is still there and the melancholy blue eyes. Kim has become an adult woman. Kim doesn't like being portrayed as a 'sex kitten'. "I can't recognise myself in the Kim Wilde the audience and the press have in mind. They think I'm a sex kitten, a doll, but I am more than that. I don't deny I have sexual energy, I just think it doesn't have to be overrated. I don't feel good in an erotic setting like Madonna does. I think I'm too British for that. The director Hitchcock had a sexist, but funny opinion about British women: they always behave themselves in a cool manner, until they pull the pants off you in a taxi. To be honest: that could be me."
Despite the fact that she is still regularly seen on television and radio, the big commercial success doesn't come. This is mainly because of her repertoire, which can be described as directionless. It's neither fish nor flesh. The uptempo songs are often the most fun, the ballads sound whiney, not least because of the horrible Fairlight computers. Her songs are killed because of too many synthesizers. In fact the singles are always the best.
Flopped albums and relationships gone sour, Kim can talk about that. She tries amongst others with Julian Lennon and Calvin Hayes (drummer of Johnny Hates Jazz). "After the tour with Michael Jackson I landed in a void. The tour was over, I had a relationship crisis and my record had flopped. I ate too much, I drank too much, got overweight and life passed me by completely. I didn't care about anything anymore."
Now Kim has a relationship with a businessman. She has left her flat (which she shared with a good friend) in London. She has even considered living in Paris, or on the French countryside. Kim: "When I hear the French language I just melt. I know a lot of French people and through them I got in touch with the French culture. I love their art, the south and Paris." She chooses a picturesque house on the English countryside, which she renovates and decorates herself. She seems to have found peace. And a motivation to go on.

Last summer Kim Wilde released the album Love Is. In the video of the hit single Love Is Holy we see Kim in a long dress instead of a miniskirt. The influence of the countryside? Her hair is more blonde than ever, so that she looks a bit like Madonna and Marilyn Monroe. After listening to the album I have an unsatisfied feeling. The synths still dominate the sound. A lot of the ballads on Love Is can be categorized as 'weak stuff'. The harder songs spark here and there. Love Is Holy is a hit, but also Who Do You Think You Are and A Million Miles Away are strong single choices. The melancholy refrain of the latter seems to be about herself. "You're a million miles away/But I feel you in my heart/Though it hurts to leave that way/While we knew that from the start/Cause you never did pretend/Our love would never end..."
Kim: "Like many women in the business, I meet many men who have a successful career and their job comes first. It's not good for a lasting relationship. I'm not eager to trade my own career for a marriage license and diapers. But I would like to have a family in the future. My brother Ricki is happily married and my father and mother have an ideal marriage. When I would have children, I would want to teach them some things my parents taught me. The love for music and art, for beauty." 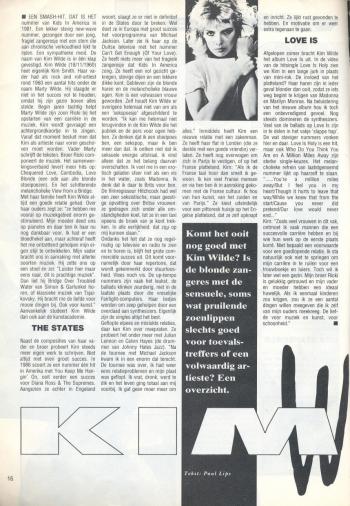 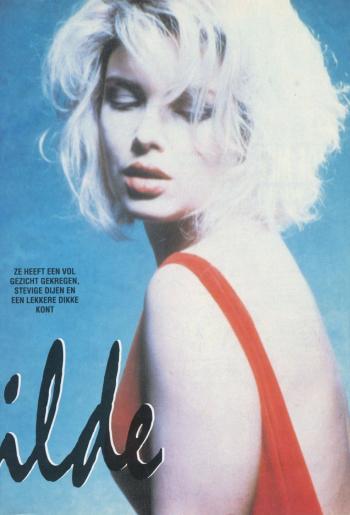