Kim Wilde: a desperation of love destroyed her ... for 2 years!

Blonde, slim, super-sexy, that's how you discovered Kim Wilde at 'Stars 90' on TF1 on November 30th. Kim Wilde, the baby doll of English rock. Kim who made Laurent Voulzy crack so much that he dedicated to her a true hymn to love: 'My nights without Kim Wilde' ...

And yet, this bright young singer of 31 years is a real survivor. This success, which once again smiled on her, nearly destroyed her, and for nearly two years she struggled in the depths of depression.

Everything went fast, too fast for Kim. At 20, her first album propels her to the top of the world's hitparades. It's the whirlwind. Whirlwind of decibels, admirers, millions flocking. Kim has everything: glory, beauty. All she needs is love.
Exactly, the voice that enters his life in the guise of jazz musician Calvin Hayes. Born a passion where Kim puts all his youth. A passion that ends up burning. Voice two years, the world suddenly collapses around her. She who had flown from success to success, knows the failure with his last record. Can she cling to love? Alas no! At the same time, Calvin and Kim break up. Kim finds herself alone with the bitter feeling of having lost her youth.

So Kim turns her back on everything that has been her life so far. She sells her London apartment and buys an old sixteenth century barn in Hertfordshire, not far from where her parents live. Marty Wilde, an English rock pioneer, and his wife, Joyce. There, Kim gets down.
"I felt like I had fallen into a black hole that I would never get out of," she said. Kim lets herself go completely. She who was watching her weight so carefully, is suddenly the victim of terrifying bulimia. She stuffs herself with chocolate and the pounds pile up. "I felt so bad that no one could understand me," she said.

So, like a teenager struggling with the stress of living, Kim begins a diary. Day after day, she entrusts to the white pages her torments, her anxieties.
Until the day his father, Marty, decides to shake her. "Look at yourself" he said, "instead of crying about the past, think about the future. I too have gone through times of doubt, but I've escaped."

These few sentences made Kim feel like an electroshock. From then on, she is determined to go back up the slope. Every morning, she is forced to do an hour of jogging in the countryside and she banned once and for all chocolate and sweets from home.
"One day, I realized that I was fine and that, in fact, I was well for a long time," she said.

And suddenly, miraculously, life goes away. Her record company is calling her to push her back to the studio to record a new album. She finds the exhilarating world of studios, she also finds what she no longer believed: love.
From him, we know nothing or almost nothing. Only his name is Paul Holmes, he is 30 years old and is passionate about motorcycles. With him, Kim relearned the happiness of being two.

So much so that today Kim is making big plans. Okay, she's back to her career, but no more about being devoured by show business. Her real life is his home in the country, nature, a simple life and, above all, Paul. Paul and the kids that Kim hopes to have. 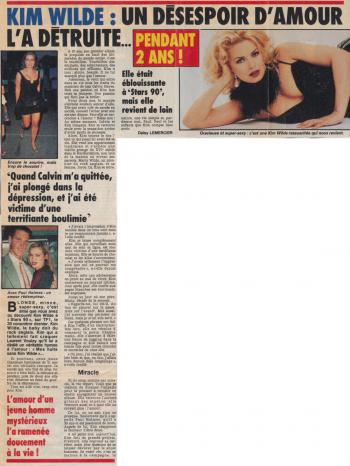