"I do sing a lot about love, but not out of despair, more with a hopeful undertone. And then in the broadest sense of the word..." Kim Wilde is older and wiser, as a singer ànd as a woman.

Your reporter has the advantage that he is seen as 'Kim Wilde specialist' in the office. That's incorrect, but no-one needs to know. The advantage of that misconception is that the Kim Wilde interviews are being done by him. And that is always a pleasure. Kim Wilde (30) is an interesting personality, wrapped in a body the Creator has taken His time for. The smile of the full sensual lips kan still melt arctic ice. But still... Kim's radiance isn't girlish anymore, the direct effect of a big emotional crisis directly after the successful tour with Michael Jackson and a series of relationships gone sour. The scars are on her soul and are invisible, but can be felt sometimes by the way she speaks. Her new album is called "Love is" and the first single is called "Love is holy". Is she getting filosophical? Kim: "People always sing about love, and it's hard enough to avoid cliche, but love still takes an important place in my life. I don't mean just a relationship with a man. Love also means trust, friendship, comfort, joy, everything else. All the good in man and let's just describe that as 'holy'."

All well and good, but her relationships aren't all rosy. Everytime she is named with a man the first reaction is: great, but for how long? Kim: "I generally meet people who are ambitious and successful. It means having to share someone with a career. I don't feel like getting out this business myself, so a possible partner is confronted with identical problems." First Kim shared an apartment with a friend. But in that metropole she felt herself increasingly estranged. Kim: "I could still cry with friends I knew from art college, but they all had relationships and lives of their own. It made me feel more lonely." Kim decided to return to the English countryside and bought a house not far from her parents. A picturesque building she has renovated with a friend as a kind of therapy. Kim about that: "After the tour with Michael, which was a long intoxicating party, I fell in a deep void. Suddenly the 'kick' was out of my life. I ate and drank too much, got overweight and didn't care about anything anymore. And then it's good to have a friend, because you don't listen to men then. Together we chose nice colours and furniture for every room. Folk, antique and modern together. Even though that friend still lives in London I have a lot of contact with her. Love as friendship, that's what I mean..."

As a singer she had to move on musically. The previous cd "Love moves"
flopped, so a new successful one had to come. Kim: "The motivation was back. I wrote, selected, contacted other writers, different producers and everything. The collaboration with my father and brother is still tight, but is less choking than before. I dare to disapprove of a song of theirs or to edit it. I have to sing it after all and my name is attached to it. I have to be strict. The family ties are otherwise outstanding. When I hear the stories about the Jacksons, even if half of them were true, I am still happy to be part of a family where love, there's that word again, and respect are held high. And should I get arrogant, my mum knows exactly how to get my feet back on the ground with a few well chosen words."

Then there's one unfulfilled dream for Kim: recognition in America, the Mecca of today's pop music. Kim: "Let the ball roll. I had a number one hit there once, but that doesn't mean much. If you want to be successful in America you have to live there. I don't know if I can. I am English even though I had American pop culture spoonfed as a child. Maybe I'll look differently when I suddenly have a series of top 10 hits there and a tour in auditoriums is offered to me. I am too much of an artist to resist that kind of temptation, or even a fraction of that."

The price of success

Kim: thinking: "On the other hand I will live in peace when America is out of my reach artistically speaking. We all know that success in America comes with a price. In my case my current relationship. My new boyfriend is a business man and he won't give it up to become 'mister Kim Wilde' in America. No true love? I am egoistic enough not to want to give up my career for a ring and some children. Even if that seems very desirable when I look at my friends. Love is not asking unreasonable things from your partner. So I'll just go and decorate another room then..." 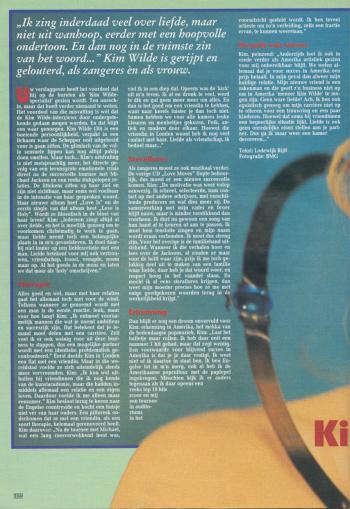 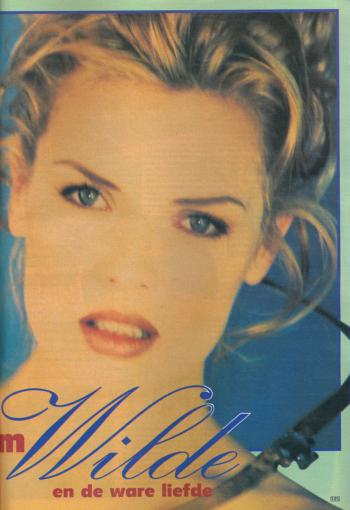