Kim Wilde back on beat

Pop star Kim Wilde was so disheartened after the failure of her last album that she had a crisis of confidence and was unable to write songs.
But she and her brother Ricki, who co-writes her material, overcame their writer's block after five months of frustration and Kim has just released a new single, Love Is Holy.
"We were hyper-critical, almost to the point of not being able to do any writing at all for months," said Kim (31). "It was difficult to believe we could come up with another successful album - our confidence was quite low. Then we wrote one song which sounded good and after that things flowed more easily."

Kim, daughter of 1950s pop star Marty Wilde, plans a tour later this year, and her new album, Love Is, is due out on May 18.
Ten years after her first hit, Kids in America, Kim says there is no creative friction between her and her brother.
"We have exactly the same idea of what we are looking for in a record. It's uncanny really because we're quite different." 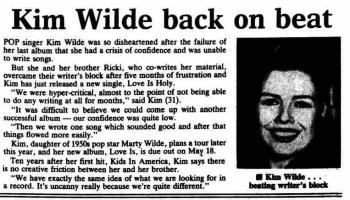