When little Kim was still sleeping and sucking her thumb, she was often awakened by her father Marty, who was busy with his guitar. Kim Wilde was born in a musical family, her brother Ricky was also always busy with music. Kim was affected by the music fever and scored hits like "Cambodia", "Kids in America" and "You Came". She became a world star. Kim also knew difficult times, though. That a wellknown name isn't a guarantee for hits, that she knows. Recently her new album "Love Is" was released. Pop reporter Peter Plaisier looked her up.

What does the word 'love' mean to you?
I don't just sing about the love between persons. It can also be about loving yourself. And by that I mean that you should trust yourself. When you have a positive impression of yourself, you can be more positive about the rest of the world. A lot of songs on my new album "Love Is" are about love. That is such a big theme. Wat love is exactly, is answered on that record sometimes, but not always. I leave that over to the imagination of the listeners. The melody is the most important thing. The songs sound happy. I am an extravagant person.

What do you expect from your new album?
I am rather proud of the product, so I expect a lot! I am very optimistic, I haven't really considered a flop. That is emotional irresponsibility on my part. I put it away. But I believe in the success of "Love Is". But in the past I have had albums that disappointed and it doesn't kill you.

The cd is just ready. Do you play it a lot?
The recordings ended only a few weeks ago. I only have cassettes. Everyone asks about them: my friends, the neighbours. I am always without. That's a good sign. I didn't listen back a lot during recording. I trusted my musicians. The songs are good and that has to lead to a good end result. I have spent more time writing than I did producing. My brother took care of that.

What do you think of the records that are in the charts right now?
I think the charts are still fascinating. They have always been good to me. There seems to be a resurgance of acoustic instruments right now. Of course there's also rap in the top 40, but I like that too. Bands like Nirvana and REM seem to go back to basics. It's fantastic that that sells well too. It has been ignored for too long. A lot of songs on my album are rather acoustic as well.

How do you think about your old material?
I love my old successes. That is the reason why I'm here, after all. without those hits my cd has no reason to exist. I have learned a lot and made mistakes, and I have only become wiser for it. I am proud of my development, the hits my brother and me made. After all these years we still wrok together. I'm proud of our perseverance.

How big is the influence of your family?
It's still very big. My father has no influence musically, but he does criticize us often. My mother is more concerned with the business side of things. My brother Ricky is the most important one, but he nearly didn't work on the album this time. He wanted to do his own project. I didn't like that. When it failed, he returned. We need eachother. That's why I'm proud of what we've achieved. Despite hard times we did it togeher. Saying goodbye and parting is easy. But working together for years with good results is the hardest thing anyone can do.

Do you like going all over Europe to advertise your album?
Of course I have seen everything many times already. But that is also true for my house. I have seen it often and I still like it. When you come back to places you've been, you always see something new and you meet other people.

Are there things you used to do, but not anymore?
Not a lot. Everything I want, I do myself. I realise like no other what is part of being an artist. When I was really popular, I was never too good to stay in contact with my fans. As well as I could.

Have you changed a lot in the past years?
There were times in my career when I was really frustrated. Suddenly I didn't have so much success as I was used to. It took me years to cope with that idea. Personally i have learned a lot. For ever negative experience there's been a good one. You learn from every disappointment. I expect a lot from this album. Still I won't be down when it isn't so successful. There's more to life than success.

What more is there for you?
I moved into a new house last year. That was a new period of my life. A new style of living. I lived in London and now I am a countryside girl. I have a cat, I ride horses a lot, I live more healthily and I have had enough of the bustle of the city. I have found my home. My career took up too much of my life. The price is too high for me now. 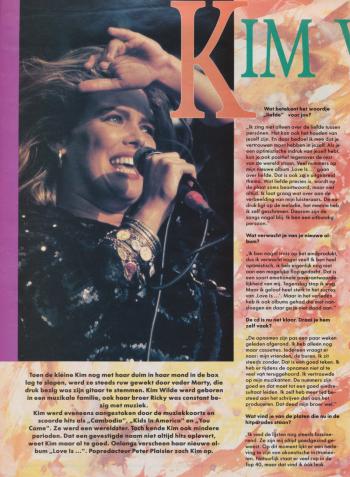 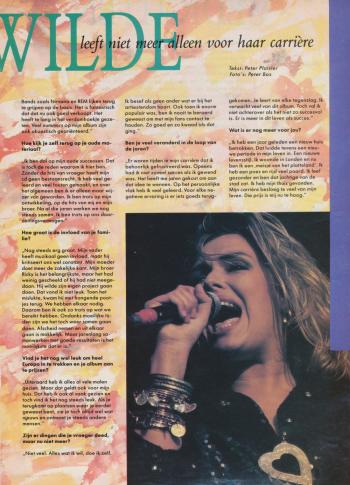