Kim Wilde: I haven't met the man of my life

She will sing 'A million miles away' in 'Stars 90' on TF1, her new single, an extract from her album recorded partly at the family studio, close to the old barn where she has chosen to live. It's there, north of London, where Cécile Tesseyre met this big 'small English' for whom Laurent Voulzy has written the famous and vibrant 'Mes nuits sans Kim Wilde'. An open hearted interview.

At the turn of a road in the English countryside, to the north of London, one sees the house of Kim Wilde behind a bushy hedge. View from the outside, it does not look, but as the front door opens, it feels like an old manor. First a gigantic room with half-timbered walls, high ceilings from where hang two magnificent candelabra bought in Paris. A large wooden table, three sofas placed around the hearth of an impressive fireplace give the room a noble and cozy charm.
"Four years ago, when I bought it, it was only an old farmhouse falling into ruin, the living room was a barn, and I tried to preserve the spirit of the house." Kim put his hand to the dough. "To decorate the houses is my passion, I imagined the transformations by closely watching the works and then I ran fairs and antique dealers."

Kim lives alone, or almost, with her cat Theo, a white Persian, and a friend, Edwina, for stewardship. "After eight years of madness spent in London running after time, I chose to relocate to here, I found the serenity. I take advantage of my friends better, instead of seeing them in a gust of wind, I live in this house so much that even when I'm on a trip, Edwina says she feels my presence. "
Kim has never been a girl of the city. Her real name was Kim Smith, born on November 18, 1960 in Chiswick, South London. At 9, she moves to settle on the other side of the capital with her parents. Today, their houses are only separated by a few kilometers. The singer of "Love is Holy" cultivates the family. His father, Marty Wilde, a rock star in Britain at the end of the 1950s, is her producer, her mother, Joyce, a former singer in a group, watches over her interests and her younger brother, Ricky, writes most of her songs.

"I do not spend a day without seeing them or talking to them on the phone." Kim evokes her childhood with happiness. "In spite of my father's job, we lived very far from the showbiz, but not from the music ... My father loved his record player so much that we did not have the right to touch it... My parents had a big collection of records, which enabled me to discover artists such as the Beatles, Carole King, Crosby, Stills and Nash. At the age of 5, I realized that my father did not have a regular job. To see him sing on stage, and the summer of my 16 years, I went with him on a tour.

Joyce is both her manager and her closest confidante. "I raised my children alone because Marty was often on tour. I tried to give them the best possible education, very musical, including classical piano lessons."
For more than ten years, Kim Wilde's career has seen ups and downs. "Three years ago, I nearly stopped everything. "Love Moves", my album, did not work, the job was exhausted, I felt like I'd said everything, I also became aware that I was no longer a teenager but a woman, and the change was not painless. When I moved to the countryside, I found myself and I got closer to my parents. I have come to understand some of their decisions. This return to the countryside has taught me to better know my sister, Roxanne, and my brother, Marty.

For the song, "High on the Moon," Kim asked Roxanne, 13, to sing the choruses. "I did not know she was as gifted. My mom recorded her unknowingly in the bathroom and made me listen to the tape."
"Love is Holy", her new album, was recorded partly in Los Angeles and in the family studio, five minutes from her home. Already a success: "It's good, but love is more important."
Always single, for Kim no wedding in sight. "I have not met the man of my life. I do not worry about it and I trust fate!" 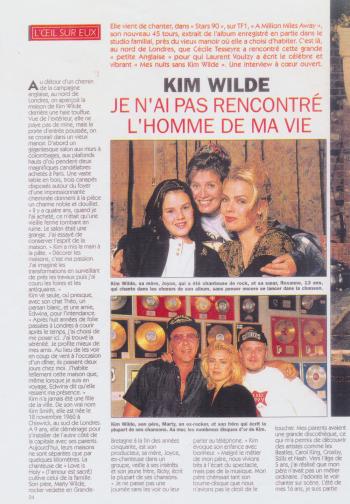 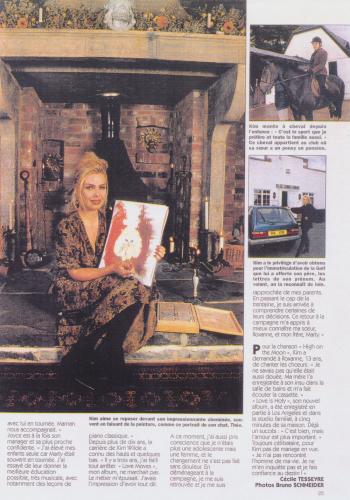