Kim Wilde: 'I was frustrated and very unhappy'

The British 'Love Blonde' Kim Wilde will never be a second Tina Turner. It's already 11 years ago since she had her first hit as a twenty year old with 'Kids in America'. The pop junkie, which she calls herself, wants to go on for at least nine more years, but then her singing career, one with highs and lows, will have to make way for something that will give her at least as much satisfaction... a career as an interior designer and mum...

Fortunately that time hasn't come yet and for now we can enjoy her for a while, but it didn't take much for a disappointed Kim to leave the stage after the failure of her previous cd 'Love Moves'.
'Some 15 months ago things looked rather bleak', Kim acknowledges. 'It's difficult to cope with the fact that an artistically successful record can't be a success commercially (Love Moves - I.L.), I was bitter and frustrated about it and my confidence had left me. Privately I was in a bad shape as well, I was unhappy in London. I'm not a city person after all and I didn't go out much either. In short: everything went bad. Fortunately my new house in Hertfordshire, a barn which I had renovated, was just ready and I could move. I am a country girl now. I have started horseback riding and have become a real animal lover. I am a lot more happy and the new cd 'Love Is' mirrors that. It's a real happy, positive record that was made amidst a period of confusion. Going from the city to the country wasn't as easy as it sounds. It was a gigantic shock and making the album was a way of dealing with that. A therapy to get me through difficult times.

Aside from your brother you now work with Belinda Carlisle's producer, Rick Nowels?
That's right, I've got two Ricks in my life now. My brother and I were both convinced that our first task was to have a hit. We have worked with loads of composers, but all those songs sounded, as good as they were, unlike a Kim Wilde song. With Rick it clicked, he's a real ally.

You have spend 11 years in the business. What is the biggest different between now and the beginning?
I am more relaxed now. In the beginning of my career I was constantly worrying about what I should do if it all ended tomorrow. Then a year went by, successful or not, because my career is one of many highs and lows, but it was still there. After a while I realised it would never be over, until I made the decision myself. When I got that I could breathe easily, because I love my work and I don't want it to slip through my fingers.

Are you afraid of that?
Of course, when I was young I worried a lot about that. After the first wave of success the third album failed. There were so many disappointments. But still that period was very good for me, because I started writing songs myself.

You have a sister of 12 and a brother of 10. Will they follow in your footsteps?
I hope that my sister Roxanne will, because she has such a beautiful voice. She really has talent. She's sung backing vocals on my new song 'Light Of The Moon Belongs To Me'. She acts like she isn't interested, like I did when I was her age. I didn't want people to notice how badly I wanted to do it. She does too, but she is such a natural. I can't imagine she hasn't got ambitions. She's a lot like me, she's a bit introverted. My brother Marty is more the sports type. he loves football and skating and also rave music and computer games.

They're probably proud of their famous sister, aren't they?
Roxanne has always looked up to me, but that's mainly because of our relationship, we are real buddies, not just because I'm a popstar. Although she was closest to me when she got to meet Michael Jackson. Together with Marty and some other children she was on stage with him during a show in Wembley. She got to meet him earlier than I did (Kim did Michael's support programme - I.L.). I still have to hear that.

Don't you want children of your own?
I am not ready for a family yet. One of the reasons is that it's impossible to combine it with my singing career. But one day it will happen. When I get out of the limelight, I will write songs for others, maybe even for Roxanne.

Is there a special somebody in your life right now?
Yes, his name is Paul Hermes and he's in the car industry. Fortunately something totally different from the music industry. He's a fantastic friend. It does help to have such an ally, but we aren't living together yet.

You have lost some weight compared to some time ago.
I started doing step aerobics 15 months ago. As a singer you have to mind your weight obviously, but that's not so bad. I'm even grateful to my career for that, because that's why I look the way I do now. I feel more fit and the kick you get from that is better than drinking a glass of wine or eating a bar of chocolate. I have a different addiction now: fitness. My voice has become better because of it too. I have never felt so healthy, and I was never fit when I was younger.

Is it easy for you to be a celebrity?
I believe it is. I have been famous since I was 20 after all. Before that I was always Marty's daughter. Sometimes the attention is great, but it can be a strain on your privacy as well. I took it on me to be famous and now it seems a duty to behave like that, like Princess Diana does as future queen of England. You have to ignore the negative sides and make the best of it.

You love art and have even went to college?
Yes, one year, after highschool.

Now you have started doing interior design?
I have had my house renovated, made a design and decorated it myself. I love home magazines, go to auctions, have antique furniture repaired and I love doing DIY in the house. I have painted my whole house, I was often covered in paint myself. I do carpentry and drilling, hang my own shelves and have even done a wall. I hate being dependent on others, I prefer to muddle on myself than to ask others for help. I am so emancipated, haha...

Would you like to make your profession out of interior design?
Oh sure, that's what I want to do when I'm past 40! I'll use my own home as a model, to let people see what I can do. I'd like to advise people on how to decorate their homes. It's the only thing I'd like to do next to making music, and I think I could combine it very well with my own family. You can't combine children with a singing career. You're away a lot and I would never use a nanny. It's my duty and a privilege to spend as much time as I can with my child. 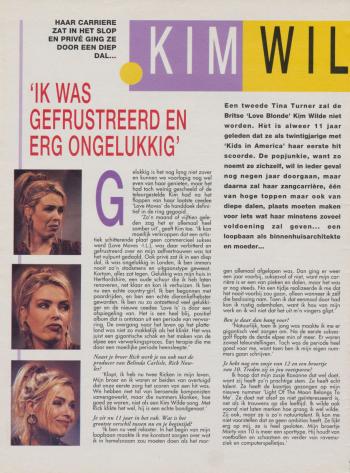 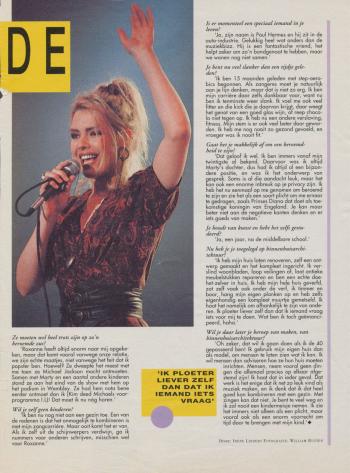