Kim Wilde: 'It isn't easy to work with your family'

Kim Wilde has gone through a lot both personally, creatively and in a business sense. Her recent cd 'Love Is', from which 'Love Is Holy' was released as a single, marks a new peak in the life of the 31-year-old singer.

During the past one and a half year Kim has changed things in her life. She moved from London to the countryside of Hertfordshire, north of the British capital. "It was logical, because my studio is there as well", the singer born as KIm Smith explains. "I feel good, selfassured, positive and fit. I have lost some weight too. Physical and mental wellbeing always go hand in hand."

The more natural surroundings have influenced Kim in a positive way. "It was a sort of therapy for me. At 23 I left my parents' house for various emotional reasons: I wanted to be iundependent, away from my family and, most of all, I was looking for my own identity. I almost started to deny my family existed, even if I was still working with them. I felt that I should be able to do it all by myself. I didn't want to need anyone else, certainly not my family. Shortly before my thirtieth birthday I decided I had fought against the fact that I am their daughter for long enough. And London also got to me. It was so stressful, never being able to park my car and continually being afraid to miss a party somewhere. It got as far as not being able to have fn, because I was worrying so much about missing out. I am glad to have lived in London for all that time, but I needed to get away. Now I plant things and watch it grow."

Kim also has a happy relationship. "I didn't ever want to say anything about this before, but yes, I have a boyfriend and we're very happy. My boyfriend is called Paul Holmes and he's in the motor trade. I think it's a privilege to be with someone who is so beautiful on the inside. Of course there's also my family and friends. The past year is certainly the happiest of all my life until now. I think the record also reflects that."

The cd title 'Love Is' comes from a cartoon series from the 1970's. There was a whole range of school products with definitions of love. The sentence 'Love is' were finished in different ways every time. Kim's single is called 'Love Is Holy'. How would she finish the sentence?
"Love is real", she says after some thingking. "I think many people think that true love doesn't exist, that it's just a daydream."

Do you want to have children?
"Not at the moment, but certainly in the future. I know how much time is needed for a family life and how hard children need you to be around. I feel guilty whenever I need to leave my cat behind now. I wonder if it's happy. I don't think children can be combined with my career. And so I want to have that in order first. When I start a family I will still be doing something with music, but as a songwriter and not as a perfromer. I don't see myself as a Tina Turner."

Kim is in the business for twelve years now. All those years she was part of the family business. Father Marty, himself a star in the 1960's, wrote a big part of her songs, together with her brother Ricki, who also produces her. Kim's mum was also her manager. How does she experience that?
"I am proud of it, because it isn't easy to work with your family. There are so many factors: we have had our ups and downs. That's why I'm proud to be so attached to one another and we get along both professionally and personally. It's easier to let go with your family. You know they'll never turn their back on you. It gives me a great feeling of security. With friends and lovers there's always a risk that they don't come back."

Kim Wilde is often blamed that she changed from a real new-wave/popstar to a hit formula. It sounds like she is a marketing concept like Stock, Aitken & Waterman. "I wish we would be intelligent enough for that", she laughs. "If we had sat down and thought things through, we might have had much more success. I think the fact that my career wasn't planned to every detail, caused all those ups and downs. My career has been full of happy accidents." 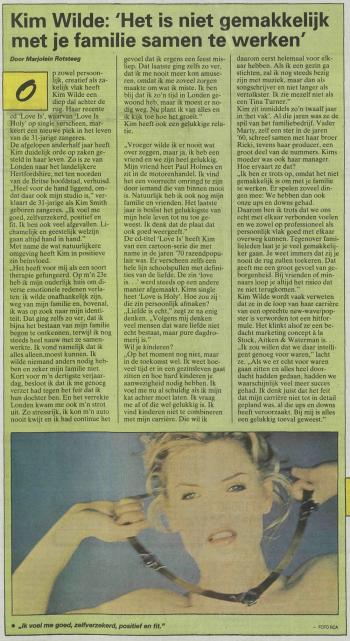